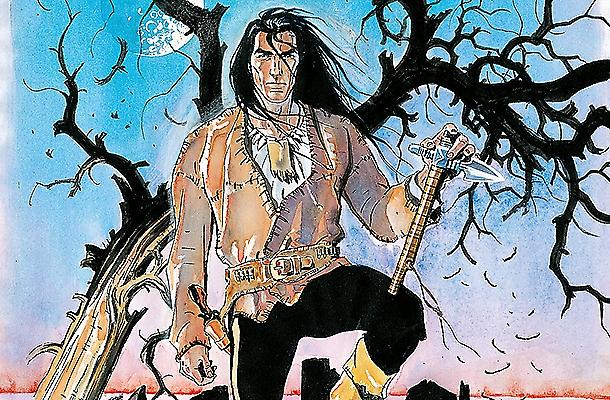 My name is Magico vento

A white man adopted by the Sioux who has become a shaman through his ability to foresee the future! 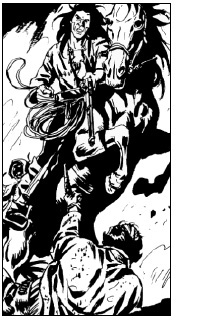 beyond the mud, the sweat and the gunpowder, off in search of a secret and obscure West, where the real Frontier is the one between the known world and the realm of the unknown. Magico Vento, created and written by Gianfranco Manfredi, combines the feel of the classic Western adventure with the spine-chilling atmosphere of horror stories. By siding with the Indians, the story of Magico Vento not only portrays their desperate struggle to survive but also their passionate quest for spirituality, amid rites, visions, dreams of deliverance and terribly real nightmares. For whites, Ned Ellis is a rebel, a renegade, a killer; for the Sioux, who have welcomed him into their community and given him the new name of Magico Vento, he is a Strange Man, in other words a shaman, a warrior and a restless spirit, unpredictable and beyond the confines of any law. A fragment of metal that lodged in his brain has wiped out his entire memory of the past, but it's also left him with an astonishing ability to foresee the future through disturbing visions and premonitions.
But what enigmatic tragedy, what bitter pain have turned Magico Vento into the man he is now? Magico Vento used to be a soldier, but he was a victim of a political-military plot. He escaped by the skin of his teeth from a car-bomb explosion when corrupt military personnel and gun-runners deliberately packed an armored car with high explosive: he was picked up half-dead by Cavallo Zoppo, an old Lakota shaman who, interpreting the signs he received in a vision, saw in Magico Vento a messenger from the Great Spirit. Taken in by the Indians, Ned "is reborn".

Yet he is haunted by a distressing past that reveals itself to him only in fragments and sometimes threatens to engulf him. As he races towards a frequently distressing future, trying to avert its most destructive effects on the Indians, Magico Vento is living a twofold role of warrior and shaman, fighting against men in flesh and blood but also against enemies that are often far more dangerous and lethal: vengeful spirits, evil spirits, mysterious creatures that can't be fought with traditional weapons and which force him to constantly seek new resources. To search for new weapons, he has to resort to the secret powers of Indian magic and call upon the powers buried deep in the human mind. But once he has activated these powers, they aren't his to keep for ever: the ex-soldier can only call up these magic forces when dealing with the excruciating ordeals he has to go through, because the force that pervades him during his communication with the spirits requires a difficult balance between body and mind which can't be sustained for long. His experiences often leave Magico Vento drained, exhausted and confused. What saves him from the burden of loneliness is the feeling of belonging to his adoptive tribe, as well as deep feelings of friendship and understanding towards others. Magico Vento is not a cold calculating avenger for whom the end justifies the means. Even though he often lets himself get carried away by violence because the rush of events forces him into extreme decisions, he respects his opponents, and sometimes goes as far as to forgive them when he realizes they have a chance to redeem themselves from the evil they've brought about.