Everything you need to know about Caravan 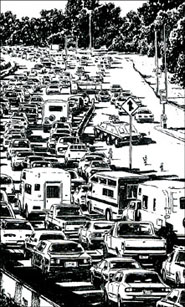 WHERE DOES THE IDEA FOR CARAVAN COME FROM?
It all began with a Bruce Springsteen song (“Seeds”, from the album “Live 1975 –1985”). At the time, I caught only some lines of the lyrics, but I understood that it was about a family that’s running away from who-knows-what. I started thinking: "What if it’s not only one family?" It could be a lot of runaway families... A whole town’s population escaping their houses to avoid a terrible menace... Not many years ago, this idea came back to my mind again, while I was nursing the idea of creating a “many-characters” series, instead of the usual series about just one hero, so I decided to exend it to the point where I’d have a tale divided in twelve chapters.
THOUGH THE SERIES HAS SO MANY PEOPLE IN IT, THE MAIN CHARACTER, WHOSE DIARY LEADS US THROUGH THE STORY OF THE CARAVAN, IS PERHAPS DAVIDE DONATI. WHY DID YOU CHOOSE AN ITALIAN CHARACTER, WHILE THE SERIES IS SET IN THE UNITED STATES?
It was intriguing to me – after dozens of John, Nick and Jill – to write about an Italian character. It’s needless to say that it wasn’t feasible to set Caravan in Italy, but in the series you’ll find an album that’ll tell a story almost entirely set in Florence and Milan, during the 1980s. I like the idea that, thanks to their origin, Davide and his family can have a different view of the unusual events they’re going through, though they live in the States. 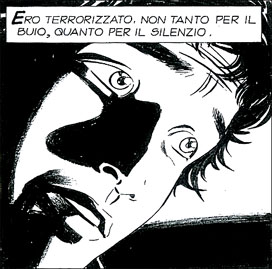 17-YEAR-OLD DAVIDE IS, AT THE MOMENT, THE YOUNGEST OF THE BONELLI HEROES. WHY DID YOU CHOOSE SUCH A YOUNG KID? AND WHY DID YOU DECIDE TO FOCUS YOUR ATTENTION ON HIM?
I did it for an eminently practical reason. I wouldn’t have to face this problem if Caravan’d only been about the Donatis: the family itself would have been what the scriptwriting manuals call a “collective character”. But Caravan is telling the story of dozens of characters. Some of them cross each other, others run in parallel. So I though it could be distracting not to present the reader with a privileged ponit of view. There was also a personal reason to it: after twenty years spent telling stories about grown-up, self-assured heroes, I liked the challenge of writing about a younger and more fragile character. To me Caravan is not only a great adventure, but also a novel of formation.

THE AMERICA YOU DESCRIBE IN CARAVAN AND THE PEOPLE THAT LIVE IN IT ARE TOLD BY MEANS OF MANY CULTURAL REFERENCES, FROM CINEMA TO LITERATURE AND MUSIC, OFTEN DETECTABLE IN THE DIALOGUES OF THE SERIES. WHAT WERE YOUR MAIN INFLUENCES IN THE DEFINITION OF THE ENVIRONMENT OF YOUR ADVENTURE?
While Nest Point is a fictional place, an ordinary coastal town in the United States, I’d say that the America I write about is filtered by an European vision – it’s seen not just for what it is, but for the things that it’s name can still evoke in our imagination. It’s the America of John Ford’s and Sam Peckinpah’s movies, of the hard-boiled novels, the America sung by the rock music and the America where Spielberg’s aliens land, the place that represented a dream of freedom for a generation.

WOULD YOU SAY THAT CARAVAN'S STORY CAN BE ASCRIBED TO A SPECIFIC GENRE? DID YOU HAVE A PARTICULAR AUDIENCE IN MIND, WHILE YOU WERE WRITING IT?
I don’t think Caravan belongs to a specific genre, but the readers will have the final word about it. The sure thing is that my mini-series doesn’t wink at TV shows like “Jericho” or “Lost”, or any other recent “cool” TV series. It’s not easy to “explain” Caravan without risking to give out “spoilers”, to use the Internet jargon. So I hope the reader will have the patience to find out, month after month, why this is a one-of-a-kind series.