My name is Gea

An orphan, photophobic, rock-singer...and what else? A bulwark against invasions from other planets! 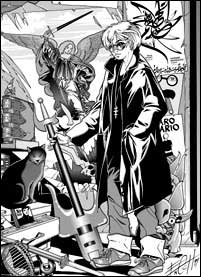 is a teen-ager, with long, stork-like legs, blonde hair worn in a bob, dark glasses she never takes off, and always dressed in black. A hyperactive high-school student with friends of all sorts, she's aggressive, enthusiastic, with a boundless passion for rock - she plays the bass guitar (badly) and is the unquestioned leader of a teenage group. She lives alone in an abandoned building on a derelict industrial estate, a semi-furnished loft which is always in a mess. She lives together with her black cat, Cagliostro (quite clearly referring to the film "Bell, Book and Candle").

She's a clever girl, an assiduous member of a Kendo dojo,which she goes to regularly, her next greatest passion after music. She certainly isn't an ordinary teenager and there are lots of other unusual things about her... Why does she live on her own? Where are her parents? How does she keep herself, without a job? Who pays for the rent, her school fees and her souped-up scooter which she runs about the city on? And why does a white star sometimes inexplicably appear on Cagliostro's head? Who is her mysterious uncle whom Gea phones when she's hard up and who seems to live thousands of miles away? Why are her bookshelves crammed with old works on demonology which she pours over late at night?

And who are those spirits we catch spying on Gea while she's asleep? Why does Gea always wear dark glasses, never even taking them off when she goes to bed? And why is it that every time the white star appears on Cagliostro's head, he and Gea rush out as if they were going hunting Gea is a Bulwark! One of many... and the city is her zone. Her mission: to stop the "intruders"! But who are the Bulwarks? And why is a young girl like Gea one of them? What is her mission exactly and who assigned it to her?