WHY DOES GEA ONLY COME OUT ONCE EVERY SIX MONTHS?
Problem: if a designer produces on average five comic-strip plates a week, that the author in question also has to write the stories, adapt them and design the covers, try and work out if it's possible to produce more than two albums a year, or 250 comic-strip plates, without working at week-ends, giving up the summer holidays or resorting to dangerous drugs to increase productivity...

WHY DOES SHE ALWAYS DRESS IN BLACK AND WEAR THOSE STUPID GLASSES EVEN AT NIGHT?
It isn't for aesthetic reasons. Gea's photophobic, she can't stand daylight or even artificial light if it's too strong. She also suffers from achromatopsia, that is, colour blindness. She only sees tones of grey and so she solves the problem of matching colours by wearing jeans and dressing in black. Both of these problems are the result of the shock she suffered when she received her powers from the dying Bulwark, an event she doesn't remember because of a protective mental "block-out" but which she often relives on an oneiric level.

WHAT HAPPENED TO HER PARENTS?
They met with a nasty end as you can imagine from the fleeting images which disturb Gea's dreams. She isn't aware of this on a conscious level but she faces up to the loss of her parents by protecting herself through almost complete denial, lying to others and to herself.

WHY DOESN'T SHE REMEMBER ANYTHING ABOUT HER PAST LIFE?
In addition to the powers given to her by the dying Bulwark, now lying latent inside her and waiting to be gradually re-awakened, Gea has acquired all her experience and memories from her maternal ancestors who handed down their sword from generation to generation over the centuries, much as one would hand over the baton in a relay race. The complete use of the powers and experiences which lie dormant within her would be fatal to her mental stability. She's prevented from having a nervous breakdown thanks to the mnemonic "block-out" the Supernior Ones put on her. She has to overcome this gradually until reaching full consciousness of her situation.

HOW DOES SHE EARN A LIVING AND CONCEAL THE FACT SHE'S AN ORPHAN?
She doesn't have any financial problems thanks to the money her «uncle» sends her by pneumatic post. The same «uncle», as Gea calls him (but he isn't a real relative), has created a fictitious identity for her. By going through the Council and Ministry of Finance records he has, from nothing, created Gea's new parents, giving them an identity, family records and tax status, as well as professions which justify their long absence. As far as school, Council, Health Service and police records and insurance companies are concerned, Gea is an only child. Her father is an engineer who works year round building dams and oil rigs all over the world, and her mother is a soprano continually on tour. Gea's looked after at home by a non-existent South American nanny who has a long-term residence permit and a family in El Salvador.

WHY EXACTLY DOES SHE PLAY THE BASS GUITAR?
In the beginning, in the first draught, Gea played the electric guitar. Then I chose to make her play the bass because I believe it's an instrument which reflects her character better. Usually, the bass player isn't at the front of the stage, like the singer or guitarist who are naturally more exhibitionistic. The bass player stays in the background but often holds the whole group together rhythmically. And so Gea, in the same way, in spite of her apparently extrovert character, is quite a shy girl who doesn't want to appear as the leader but who secretly, as a Bulwark, plays a vitally important role.

WHY THIS STRONG MUSICAL CONNOTATION?
The idea for Gea came in 1993 and was thought up as an alternative to Sprayliz, which at that time I was doing for "Intrepid", in case the public didn't like that character. Instead, Sprayliz was successful and Gea was set aside for five years. As an alternative to the high-school graffiti artist who went around at night decorating the city with huge murals, Gea was put in the youngsters' musical world consisting of concerts, garage-bands, rock festivals, auditions and dreams of contracts with record companies.

WHY IS GEA'S MAIN ENEMY, THE PRIMA DONNA, A FASHION DESIGNER?
Because I thought that in the heterogeneous world of high fashion where extremes and transgression are the norm, you could easily find a member of the Enemy Race like the Diva, without it causing fear or a stir. If she were to ostentatiously display her long horns during an important gala it would be interpreted as the brilliant idea of a creative mind and not as a sign of her alien nature.

WHAT IS THE SIGNIFICANCE OF THE CROSS GEA WEARS AROUND HER NECK?
Gea's cross is really made up of four "F" s, the initial letters of the words which form a motto. They represent the "Four Means" that the Bulwark must have to be able to undertake his or her mission - Force, Fidelity, Fortitude and Faith. The latter is important because it represents a moral challenge. To consider everyone trustworthy or "friends" instead of enemies. As long as a Bulwark is surrounded by enemies he remains reserved and on the defensive and his spiritual development suffers. On the other hand when he stops taking other people's behavior as a personal insult or a threat and, instead of withdrawing into his ego, he stays in a good mood then he manages to favor his spiritual development. The cross also represents spatial orientation, the intersecting points between the vertical and horizontal lines the axis of the worlds. The Bulwark is like a shaman, in that when he attempts an extra-corporal experience, he can't undertake the trip alone. He needs some help, the axis mundi since he will meet hostile, harmful spirits on his way who want to stop him fulfilling his mission. Gea's cross has this function. 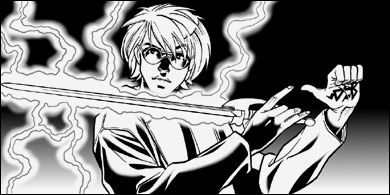 WHERE DOES THE IDEA OF THE SWORD COME FROM?
The idea for the young female «devil hunter» (but these devils are a race of their own who have nothing to do with the supernatural) came to me from all the novels and fantasy comics I had read up until then. The character of the «Bulwark» watching over the crossing between the different universes is a popular theme with authors of this literary genre, exactly like the sword with magic powers, as in the case of King Arthur's Excalibur or Elric of Melnibone's Stormbringer, right up to the sword of Shannara. All the events are to be read as a sort of «urban fantasy».