The world of Gea

In the Multiverse all worlds can exist. And Gea's city is right over an Access Zone...

Macrocosm: a sort of «cosmological» reference. Our planet, the Earth, is on a Primary Point of Convergence of Dynamic Dimensions. In other words, it is in an annular universe close to an Astral Meridian , a segment of a circle of primary energy, energy made by the universe, which attracts the outermost armillary spheres, the Errants. The Errants are moving universes which travel along the Meridian. The fact is that where these armillary spheres cross the astral meridian bits continually break off the various continuums and different ethereal "moods" are mixed together. These cosmic interferences happen quite often in Multiverse, and few of the civilizations which live there are aware of this. 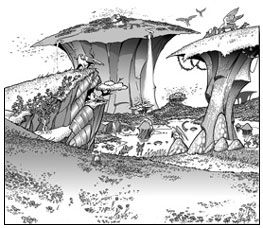 But the point is that microscopic events have microscopic effects - "cosmologically" speaking - on our poor planet. Every time these interferences occur we can have intrusions. Alternatively, the presences or energies which live on other planes of existence are capable of coming into our dimension. Some of them are absolutely harmless and have lived on our planet for millennia without disturbing us except for resulting in legends about fantastic beings or animals (the Irish 'Little People', Scandinavian Trolls, sirens, centaurs, the Cyclops and the Minotaur from Greek mythology, the animal gods of Egyptian theology, the Yeti, the Phoenix, the Chimera, Chinese dragons etc...).

On the right is one of the oldest symbolic representations of the dynamic structure of the Whole. The Earth, shown in the centre, is crossed by two straight parallel lines which go through the sixty-three layers of the upper and lower worlds described in Hindu mythology. The blurred background symbolizes infinite space made up of atomic particles. This illustration from 2000 B.C. correctly interprets the Dynamic Totality of the temporal space continuum which forms the Existent Whole. The Earth is crossed by an Astral Meridian, one of the infinite primary circles of energy which make up the supportive structure of the Multiverse. The numerous layers of lower and upper worlds in the illustration symbolise the multiplicity of the universes which co-exist with ours.

On the left is a schematic drawing of the theoretical structure of the Whole. It is easy to make out the framework of Astral Meridians and the Annular Universes, areas of fixed space undisturbed by dimensional energy flowing along the Meridians. The Earth is situated in one of these fixed universes and is permanently positioned near an Astral Meridian. And so it goes through periods of great turbulence in energy flows and marked dimensional interference.

The Errants or moving universes are carried along the Astral Meridians by fluxes of primary energy. As you can see in the diagram on the right, they cross and penetrate the Annular Universes without interacting with them. Their presence is only noticeable by means of altered states of consciousness, characteristic by those of the psychic and the alienated. Areas of turbulent dimensional energy flows or Knots may form around the Astral Meridians.

he figure on the left shows the original atom of Leadbetter and Besant - "Occult Chemistry, 1908" - and is the one which comes closest to a schematic drawing of a Node. Errants which get caught up in this vortex of energy every now and then go near the Astral Meridian and come into contact with the Annular Universes. In these cases the strong interference of dimensional energy causes "breaks" between the different universes with exchanges of "ethereal moods" and consequent intrusions and/or expulsion of matter.

The Earth has been the centre of such zones of dimensional turbulence for little more than 100,000 years. The intrusions and expulsions of living beings and inanimate matter - the latter is always destroyed in the process - happen very frequently. When interferences like these take place in downward vortices we have «intrusions». In the diagram on the right, a downward vortex involving our planet is highlighted, with the different distinct areas of intrusion marked by hermetic characters distinguished according to their amplitude and duration. 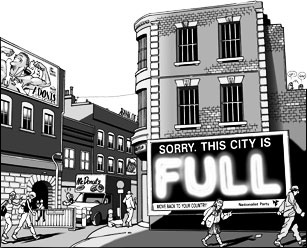 Now let's see what things are like in the Microcosm.
Each of the different "zones of jurisdiction" on the Earth, where the dimensional thresholds usually open up, is entrusted to a single Bulwark who has to keep an eye on it so that no obvious hostile intrusions take place. The city where Gea lives is one of these zones, a metropolis with no identity, a sort
of amalgam of various European and North American cities. It has a river, big bridges, a lovely green area in the middle but it isn't New York. It has large parks on the outskirts with sequoia forests and deep canyons but it isn't Los Angeles or San Francisco. Its police force is like the European ones, there are vast communities of Indian and African immigrants, but it isn't Paris or London. It may well not even be in our universe but on some parallel plane of existence, where everything is similar to the things we know but isn't at all the same.

The historical setting of Gea's story is that of the present day.
Gea's musical tastes are the same as those of today's teenagers, such as ranging from classics Bruce Springsteen, Peter Gabriel, Jaco Pastorius to emerging artists like Portishead, the Cranberries, Bjork. Gea plasters her loft with posters of modern artists like Keith Haring or Hassan Massoudy. The socio-political events which accompany her adventures are those of our own society - a high rate of immigration from poor countries, environmental problems, xenophobic intolerance, violence against the weakest fringe groups of society, instrumental use of the death penalty. Local and international events in our daily news are reflected in Gea's stories. Even the "dimensional intruders" who make up the vast communities hidden in the city's ghettoes are the imaginary counterpart of Italy's illegal immigrant population who come to Europe in search of a better life.