Cagliostro, the three poltergeists and her uncle

Gea's strange family: a cat, three poltergeists and an imaginary uncle that we never see...

Cagliostro is the pussy-cat in the home.
A beautiful, big, black cat which, like all cats, thinks only about eating and sleeping. But he also means much more to Gea, being her only confidant. If Gea and Cagliostro fhad lived in the Middle Ages, they would without a doubt have ended up being sent to the stake, as she would stand out as a classic example of a witch, with her 'family' of just one black cat. 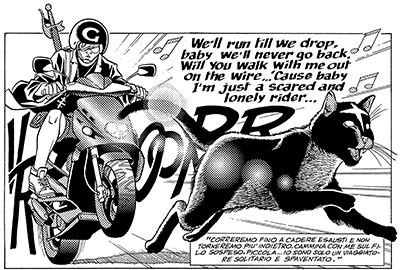 Cagliostro's role is that of a "hunter". No-one knows where he came from but he's been with Gea all her life. Every time that the dynamics of the dimension's energy currents cause a "threshold level" between our plane of existence and another, the "white star" begins to appear on his forehead and he makes a flying start to lead Gea to the place where the invasion has occurred. Then the pussy-cat turns into a «pointing dog», sniffing out the intruder and showing Gea where the intruder is so she can later confront it. Apart from this, Cagliostro is an ordinary pussy, lazy and sleepy during the day, a hunter by night. 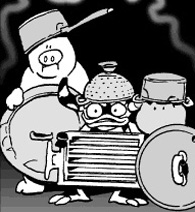 three «poltergeists» to Gea is a type of "live and let live" philosophy in the household. Gea never openly mentions them, she ignores them but is always aware of their presence in the house. We don't know where they come from nor why they've chosen her and her house, neither do we know why she puts up with them. We can only assume they feel safe under the wings of a Bulwark whose very presence is enough to protect them from possible "transdimensional predators". They aren't especially intelligent, just a little bit more intelligent than apes. But they're very fond of Gea and feel a little in awe of her. So they never make themselves openly visible or on purpose. We know they're in the house because of the little mishaps that happen around the house - for example, they stink the place out during an unsuccessful cooking experiment, they flood the bathroom when they go swimming in the bath, they paint the walls with hallucinating designs which they probably want Gea to like, thinking she'll find them relaxing and instead they give her nightmares. To curry favour they mend whatever Gea breaks; they make little things out of leftover materials to decorate the house (according to their taste), they get hold of records and CDs - we don't know how - but the owner of the music shop where Gea and her group go is always complaining about petty theft... At night while Gea is asleep they sit next to her, watching her, snuggling up to her. They take instant photos of her which they plaster over the walls and light votive candles under them. Gea puts up with them - sometimes she's flattered by their attentions, more often she's driven crazy by them and she swears at them, sending them flying in all directions. Outbursts which worry her little pets and make them try harder, to the annoyance of our protagonist. They are the comic support in the series.

The «uncle» is an imaginary character whom Gea seems to know very well even though she has never seen him. Their only contact is by phone or pneumatic post. He finds her the money she needs to live on, to go to school and buy the things she needs to carry out her mission. And he gives her the instructions to carry out her mission as a Bulwark, sending her newspaper cuttings, police reports, news services and any evidence whatsoever about mysterious happenings which might concern intruders.