The creators of Legs

Nathan Never, Legs Weaver and their science fiction universe are the result of the co-operation of three authors: MICHELE MEDDA, born in Cagliari on December 7th 1962; ANTONIO SERRA 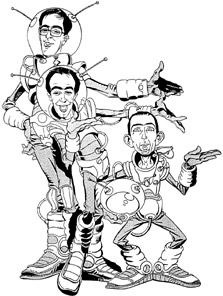 , born in Alghero on February 16th 1963 and BEPI VIGNA, born in Baunei (Nuoro) on July 24th 1957. Medda, Serra and Vigna met at the beginning of the Eighties at the cultural centre "Il Circolo", run by Gianfranco Ghironi. They come from different educational backgrounds: Medda has a degree in humanities and wrote his thesis on Italian detective stories; Serra published a non-commercial science fiction magazine for the lovers of this genre with the title "Fate largo!" Vigna has a degree in law and has worked as an attorney, in addition to signing many articles for the newspaper"L'Unione Sarda" mainly concerning the study of the island's popular traditions. Yet the three men share a passion for cartoons and together they founded the group "Bande Dessinée". Their acquaintance with Alfredo Castelli earned them the approval of some of their proposed subjects for Martin Mystère and then together they wrote their first story of the Detective dell'Impossibile, which is how they were eventually introduced to Sergio Bonelli Editore. Still working as a trio they created many more scripts for "Martin Mystère", "Dylan Dog" and "Zona X". Finally, after editing the Nathan Never and Legs Weaver project together, they began to work separately on the scripts of individual stories. Medda has individually written adventures of Tex, Nick Raider and Dylan Dog, in addition to a comic strip "Digitus Dei" illustrated by Casini and published by Magic Press. (reprinted by Peter Pen), and collaborated to series from numerous publishers like Disney, Rainbow, Marvel/Panini Comics.In 2009 Caravan hits the newstands, mini-series in 12 episodes published by Sergio Bonelli Editore. He is currently working on his miniseries Lukas, co-authored with Michele Benevento, hitting newsstands in march 2014. 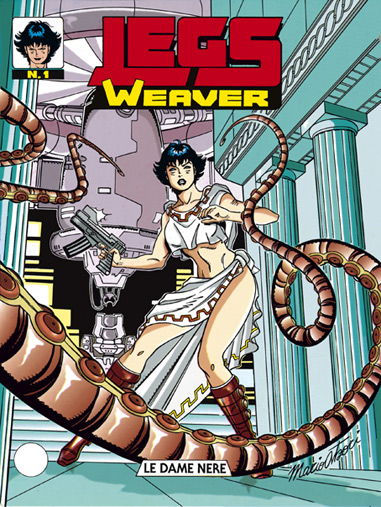 Serra, who is also the head of the editorial board of Nathan Never and Legs Weaver, has been the protagonist of a long "conversation" on the graphic novel genre contained in "Eroi di inchiostro" by Alberto Ostini and Cesare Garbellini; his new character, Gregory Hunter, came out in the year 2001 and in 2009 Greystorm made its debut, a mini-series co-created  with Gian Mauro Cozzi. Vigna, an expert in Franco-Belge comic strips, has written scripts for Nick Raider and Zagor and boots the series Asteroide Argo, a spinoff of the Nathan Never monthly series. He has published a story with elements of the fantastic entitled "L'estate dei dischi volanti", published by Condaghes, as well as a number of essays (together with Medda); working jointly with the other two components of the "banda dei sardi" and with Michele Masiero, he has also written "Raccontare Martin Mystère" (Glamour).