The world of Legs

East City, a megalopolis where the traffic, climate and pollution have reached absolutely intolerable levels!

Apparently at this point I'm supposed to talk to you about the world where I live. To tell the truth, I'm better with grenade-launchers and laser rifles than with words, but I'll try anyway.

My colleagues at the Alfa Agency and I, including that bad-tempered Nathan Never, all live in the futuristic metropolis called East City, a rather anonymous name that I hope will soon be changed into Weaver-City in my honour... But, joking aside, it is a real metropolis distributed on seven overlapping levels: the higher levels are the rich zones, while the lowest ones, which are also the oldest, are the slums and tenements. As you can imagine, there's no lack of criminals in such a place and, although I don't want to boast, I doubt whether there are many people here in town who have nabbed more of them than me... Do you want to know what it's like living in a city with tens of millions of people? Well, you feel rather tightly packed in... The traffic here is absolutely awful, as well as the climate and the pollution, and sometimes my instinct almost goads me into breaking up traffic jams by using the weapons I carry with me. But all in all I'm rather lucky, as I live in a seventh-level apartment with my friend and colleague May and with Harvey. 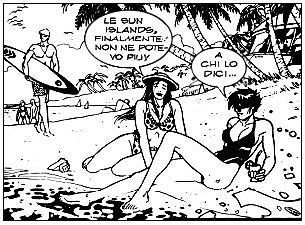 During our (scanty) spare time, May and I practice our respective favourite hobbies: so you will find May at the supermarket or, alternatively, at the Indian restaurant, at the Chinese restaurant, at the Italian restaurant, etc., while I prefer the gym or, even better, the Alfa Agency's target shooting range, where I can choose among many different types of weapons and perfect my proverbial and unerring aim. But my missions take me far from home most of the time: sometimes I have to go to the Sun Islands, a real nature paradise, which is also the ideal refuge for traffickers who have some illicit trade to hide, or to the Territory, an extensive desert just beyond the border of the city. But there's more: while chasing one outlaw or other, or while trying to dismantle some criminal organisation, I've even been as far as the orbiting colonies, into the jungle, to exotic countries that were once called Egypt, Mexico, Haiti, and even into a parallel dimension, a mysterious and fantastic world bearing the fascinating name of

rincorrendo questo o quel fuorilegge, cercando di smantellare qualche potente organizzazione criminale mi sono spinta fino alle stazioni orbitanti, nella giunglaWaldur. Basically, I think there's no place in the whole Earth-Moon system that hasn't been (or which won't be at least once in the future) the venue for one of my amazing missions!