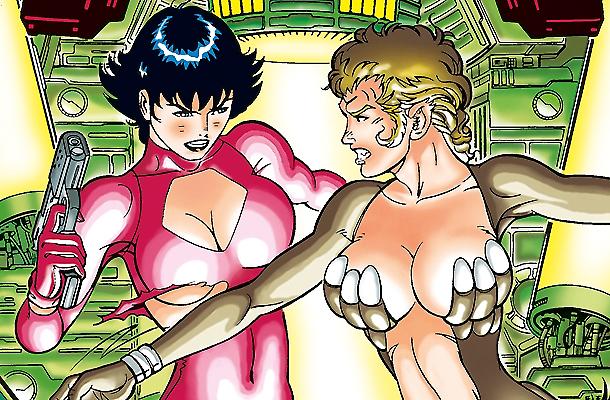 The Black Ladies and the Sin Club are the two mysterious secret sects locked in a perpetual struggle against each other. 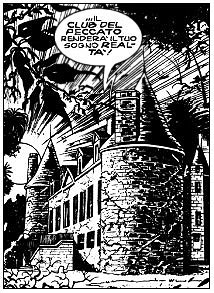 And now I'll talk about my enemies. A real toughie like me has thousands of them, but there are two, in particular, who have really given me headaches.
They are two powerful secret organisations, the Black Ladies and the Sin Club. Their aims and purposes are very different from one another, but their final objective is mutual destruction.

The Black Ladies were born a few years ago. The organisation was founded by a woman called Jahna, who had had trouble with the male sex and so decided to create an organisation whose sole objective was to destroy all men. Actually, that wasn't really their only purpose all the time: at the beginning, Jahna and her Black ladies were content with fighting against men, whereas destruction was not yet part of their plans. But then something happened, which I have discovered only recently, and things came to a head: another woman replaced Jahna and changed the objectives of the group. Absurd though it may sound, the woman who took command of the Back Ladies was... me! Or rather, a "me" from a parallel universe, whose name was also Legs Weaver (rather complicated, eh?). I'll try to explain things more clearly, though it's not easy. In another universe there existed a terribleinterdimensional being whose name was Caym.

Caym ruled with an iron hand and kept all women subjected to his will. In Caym's world we were slaves and men were our masters. I, or rather, the Legs Weaver of that universe, rebelled against that state of things by causing a revolution, but just when Caym was about to be defeated, he managed to get away through a dimensional portal. Legs followed him and they both found themselves here on Earth. Then Legs met Jahna, replaced her and started to use the Black Ladies organisation for her own purposes, namely to get revenge on all men and track down her mortal enemy Caym and kill him. Yes, Caym... what's happened to Caym since he arrived on Earth? 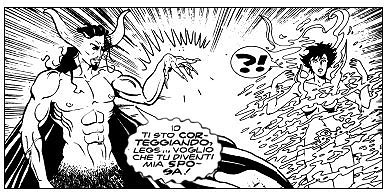 Caym founded the Sin Club, an organisation whose main objective is to be sinful (obvious, isn't it?). The Club is very powerful, it's a sect, but actually its aims haven't yet been made quite clear. In the past, I had loads of fights with many of its members and I always won. Among the unlucky members I defeated, one at least is worthwhile remembering: Alì El Bashir who cast a spell on me to make me fall in love with him. Then there was also Roman Mariner and his cousin

Rita, they were perfectly prepared to destroy the entire world in order to make their own dream come true: that of creating a new race that could live underwater. And finally, the mysterious Sytri who actually turned into a devil before my very eyes to impress me and then tried to marry me. At that time, albeit for a very short period, I was appointed the queen of the Sin Club. They thought they'd managed to awaken my dark sides and were convinced I'd accept the role they'd offered me. But it was only later on, when I destroyed their den, that they realized how mistaken they'd been... The Sin Club and the Black Ladies have now destroyed each other. Jahna is dead and Caym has been destroyed. But Rita Mariner is still alive, and I have a sort a feeling we're going to hear some more about her...