Everything you need to know about Napoleone

FILM OR LITERARY CHARACTER HAS INSPIRED THE FIGURE OF NAPOLEONE?
In his physical and features and his personality, Napoleone is quite like Marlon Brando, an actor who fascinated me a lot when I was an adolescent and whom I still appreciate very much. I needed a manly hero with great physical and moral qualities, but also characterised by deep sensitivity, a man capable of grasping the complex features of human life. Of course, not all of Marlon Brando's repertoire could be perfect for the features of my character, but the overall impression I gained of this powerful actor was that he doesn't conform to the heroic optimism of his contemporary Hollywood stars, while not being a maudit. So I thought he was the right man for the idea I intended to develop.

HAS NAPOLEONE ALWAYS BEEN GRAPHICALLY REPRESENTED AS HE IS NOW?
After all the revisions and corrections I have made in my attempt at creating his personality, I don't actually know how much is left of Marlon Brando in Napoleone. His physical resemblance is also fading away, as it has now been interpreted by so many different designers and in such a variety of styles. In fact, the character of a graphic novel is partly the result of collective work, and what's interesting is that he finds his own look and acquires his own voice over time, tending to detach himself from the author's initial choices. In my original idea, Napoleone was supposed to be a bit more adult and shabbier, a little fatter and more... well more of a drifter. But if we were to ask him, I don't think he would now regret the treatment we had reserved for him initially! We've postponed his period of descent into brutishness and, frankly, I believe he's glad. For damned as he may be with his endless adventures and ups and downs, Napoleone has never had a great inclination towards pessimism. 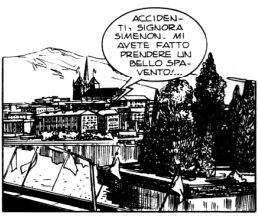 IS IT TRUE THAT ORIGINALLY THE SERIES WAS SUPPOSED TO BE SET IN MILAN'S CHINATOWN?
Yes, it is. Originally, Napoleone's basic setting was going to be Milan, my hometown. I had situated Hotel Astrid, the boarding-house owned by our man, in Via Paolo Sarpi (Paolo Sarpi street), right in the middle of Milan's Chinatown. It's a pity that I had to give up Milan because I could have undoubtedly moved
him around with greater ease there rather than in any other town in the world. But in the end my main concern was that too much topographic realism might have negatively affected the protagonist of a popular comic strip, as many readers might have felt it was too far-removed from their own experiences. So I was persuaded, not without some regret, to exile him to Switzerland, in Geneva, a city I do not know very well - my familiarity with it is more or less like that of our readers, I guess -but which has the advantage of being quite close to Milan, while being more exotic both in the mentality and customs of its citizens. However the Swiss city is only a pretext, and certainly not a meaningful place for the growth of Napoleone's identity. The real prevailing background of the saga is, in fact, his interior world, and his adventures actually take him everywhere, beyond any border and into the most varied geographies.

WHAT MOTIVATED THE CHOICE TO WELCOME SUCH ATYPICAL DESIGNERS INTO THE SERIES AS PAOLO BACILIERI?
Bacilieri, like Nizzoli, is not considered as an author belonging to the "Bonelli school" - assuming that we may agree on this definition and that such a school exists -, but I have always thought of both as talented cartoonists, who couldn't have been excluded by statute. I believe that in addition to the many evident similarities, a publisher's products also reveal as many substantial differences. Now I don't want to open one of the usual endless discussions about the future of Italian strip cartoons, with the old useless distinctions between "high-brow" and "popular" strips. What I would like to say here is that I simply draw on the pool of talent and professionalism made available by the Italian range of cartoonists. Bacilieri and Nizzoli can also be considered as fully entitled to become a part of the popular strip heritage. In conclusion, I would rather accept the definition of a "Bonelli ethic" rather than a "Bonelli school". As far as I know, this ethic has proved capable of eliciting professionally reliable proposals, sometimes even in line with the most praiseworthy tradition. 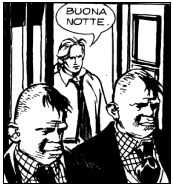 U SEEM TO BE CHARMED BY THE FIGURE OF THE "DOUBLE" IN YOUR SCRIPTS. WHY?
There are "materials" in Napoleone's stories that may seem to be rather unconnected with traditionally Bonellian themes, such as the contexts of the psyche: the unconscious, subconscious, myth, metaphors, symbols. Things that are no longer the preserve of a limited audience, but today have become part of our common feelings, as is shown by the increasing number of pages devoted to psychologists and psychoanalysts in most high circulation magazines. So, I don't feel such a revolutionary in stating that I wanted to extend the interests of a character like Napoleone to this kind of implication. On the contrary, the troubles of our souls have always concerned popular heroes; in our case, perhaps we are simply taking a more updated and specific look at the matter. The theme of our identity, and this includes the double, our shadow, our alter ego - looking at the world of our other self who walks beside us and is in a sense the key to our own identification - is a central theme in our hero's mental alembic. His tendency to look at things this way offers far wider perspectives for alembication compared to the usual settings of detective or noir stories: Good and Evil are two sides of the same coin, essential and necessary to each other, and we are the coin, fully immersed, against our will, in this eternal conflict. Psychoanalysis offers us some tools to attempt to orient our movements, but without sparing either us or Napoleone the ups and downs of the human condition.

WHAT BOOKS COULD WE READ FOR DEEPER INSIGHT INTO THE ONEIRIC-MYTHOLOGICAL CONTENTS OF THE NAPOLEONE STORIES?
I don't like the idea of suggesting further reading for a better understanding of Napoleone. I would prefer to believe that our character is self-explanatory. I would like to be able to say that no books are necessary: each one of you may draw whatever you wish from the reading of Napoleone and readers who are interested in these comic strips certainly know how to direct their insight. However, if we sometimes bring a particular author to the readers' attention on the 'your mail' page, it is mainly because we are willing to share with them the personal pleasure we experienced when we "met" that author in the pages of his works. Of course, we refer only to subjects connected with those dealt with in our stories, where matters similar to those addresses in our strips are developed more fully and exhaustively. But I repeat, this shouldn't be considered as a support needed to understand Napoleone. With graphic novels, unlike the rest of literary production, there is no obligation to provide references at the end of the publications, even though our work is of course the product of our experiences, and therefore of our background reading. Anyway, apart from Napoleone, I would like to recommend everybody to read the classics, writers like Pirandello, Baudelaire or Kafka, just to mention the first three names that come to mind. I can say that  I have a creative debt to such authors, not to mention Carl Gustav Jung among psychoanalysts or Plato and Nietszche among philosophers... But the oneiric-mythological implications that have been developed throughout the whole history of human thought are the core of human life and each one of us approaches them through his or her own personal path.

HAVE YOU EVER CONCEIVED OF A PARALLEL SERIES WHERE NAPOLEONE'S PAST AFRICAN STORIES CAN BE TOLD, AS HAPPENED WITH MISTER NO'S WAR STORIES?
No, actually I've never thought about anything like that. Not in this particular case. Rather I thought that it might be interesting to develop the theme of an "other world", beyond time and space. A sort of orgy of imagination, within which brand new rules and procedures could be established and apparently contradictory characters could be related to one another creating effects of absolute contrast... but it's an idea that somebody else might also like, not necessarily me. We will see.