The one who stands out most prominently among the crowd of psychopaths and unscrupulous murderers is... the Cardinal! 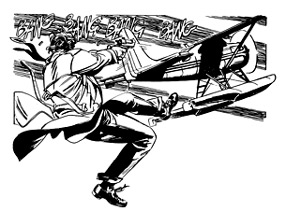 Napoleone's adventures are mainly focused on his investigations of different kinds of criminal events. The plots and intrigues that he has had to discover and resolve up to now have involved many characters linked to the world of the Russian mafia and the Japanese yazuka, mysterious and powerful African or South-American shamans possessing the arcane secrets of their own civilisations, small dullards ready for anything for a fistful of coins, ruined noblemen running after desperate fancies, old bewildered killers in fits of schizophrenia, international traffickers dealing with the illicit trade in art works. In addition to delivering culprits to justice, our entomologist-detective also highlights Evil in its most mythical and metaphorical aspect. Divided as he is between the real and the dreamlike world - that is the world existing "above ponds, valleys, mountains, woods, clouds, oceans, beyond the sunshine, the heavens and the boundaries of stars and celestial spheres", where his affectionate Lucrezia, Caliendo and Scintillone live), he does not hesitate when he finds himself facing apparently surreal threats, such as Harpies, Sirens,the bold Bellerofonte, the god Pan,
veritable icons of the popular horror imagery, like Earl Dracula, hordes of ancient samurai warriors, or cult movie stars like James Cagney. 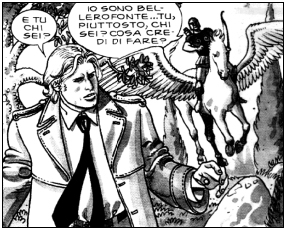 Whatever dimension his enemies may come from, Napoleone always tries to understand why human nature is so strongly tempted by Evil, which takes on the most varied shapes to disguise itself. He always seeks to find an explanation, from his layman's point of view, in order to forecast and unmask strategies, and finally neutralize men's destructive and self-destructive potential.

Victims and tormenters seem to be tied to one another as if they were controlled by a perverted scheme devised by fate; indeed, these roles sometimes seem to mutually alternate even within the same individual, conveying the feeling that humans are only the impotent actors of a script that has already been written by a scoffing puppeteer, who has previously assigned each role. Through the cases brought to his attention, Napoleone also explores human nature and, thanks to his special sensitivity, he manages to see through the game and identify the invisible forces acting behind the appearance of real events. Napoleone can grasp the auras in enchanted places and perceive the profound breathing of nature; he knows that the motor of human actions is hidden in the underground of their unconscious and in the plots of their dreams.

But notwithstanding all this, there is no ascetic spirit in him; on the contrary, he lives his life from day to day with a very pragmatic attitude, looking after Hotel Astrid's business and his beetle collection. Essentially, Napoleone is a romantic and an idealist who, while feigning scepticism, will never to stop believing in the possibility of improving the world, a little bit at least.