Mrs. Simenon helps him to run the hotel, so he can devote himself to his favorite hobby: collecting beetles...

Ten years after his flight from Africa, at the time we meet him, we find Napoleone in Switzerland, in Geneva. He is about thirty-five years old and runs a small proprietary hotel called Hotel Astrid. He mainly works as a night porter in the hotel and is helped in its management by the grumpy 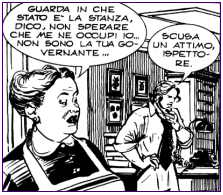 Mrs Simenon, a sort of Swiss housekeeper who is very fond of him, so much so that Napoleone defines her the "angel of his home". Napoleone is a rather solitary type and tends to hide in his hotel, where he devotes much of his time to the study of beetles (his eternal passion) and crime literature. His need for solitude (which he virtually fails to fulfil all the time) is Napoleone's main longing and a curtain to hide his actual search for the ultimate meaning of things. And he is doomed to pursue this meaning perpetually while never quite managing to grasp it completely. While he has a special relationship with the world of the "invisible", Napoleone is not a mystic:

Inspector Dumas and assistant-inspector Boulet continually spur him to get involved in more concrete and realistic investigations, since they are well aware of his qualities as a former policeman and his authority on criminal matters. But it is only when the cases proposed by his inspector friend arouse his curiosity and involve him personally (such as the periodical reappearances of the Cardinal), that Napoleone overcomes his reluctance and shows all his personality, that of a real man of action, coming to blows with criminals and overheating his caliber 9 Beretta. The intrusion of Lucrezia, Caliendo and Scintillone into Napoleone's perception of daily life is a crucial element of the Napoleone series. These three creatures represent three different aspects of his personality, which sometimes are opposed to each other, while simultaneously maintaining a constant dialogue with him as autonomous entities. Lucrezia is a nymph who claims to represent feminine "sensitivity"; Caliendo is a grotesque house-steward who is pedantic and sententious; Scintillone is a little fool, intolerant of any rule and discipline.