The world of Napoleone

Even in the most dangerous investigations, he never relinquishes the company of three elves springing from the unconscious...

According to some legends of Native Americans mythology, the material world does not exist, but is rather "dreamt" by the spirits. In other words, it is not men who produce dreams, but it is the "Dream" that produces both men and things. 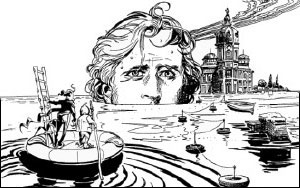 The faculty of dreaming itself, therefore, is a gift men receive from the Spirits, allowing them to perceive this Cosmic Truth, though rather confusedly. Napoleone is tempted by this thesis, but the rational and materialistic component of his personality fights against it, and he fears that everything might be only chaos. Napoleone defines himself as a heroic sentry who guards the borders of the invisible world, while trying as far as possible to keep his feet on the ground. So in Napoleone stories there is always a place beyond the boundaries of time and space, continuously interconnected with the real world, and it is the dwelling of all the "figures" that have been produced by human imagination (from Pinocchio to the Minotaur), as if they lived in a sort of gigantic warehouse. Dreams, nightmares, reveries and ravings coexist here, waiting for their legitimate human producers on the Earth to require their presence. This world is zealously administered by an incorruptible bureaucrat and is managed by a commission of sages chaired by the Governor of Chance.

Occasionally, Napoleone has the opportunity to access this improbable territory through his dream power and arrive at discoveries and conclusions about human actions that would otherwise be unsuspected. The series dedicated to Napoleone Di Carlo draws its origins from detective and noir stories, a genre outlined by two great authors: the film director Alfred Hitchcock and the writer Raymond Chandler. Yet the heritage of this narrative tradition is nothing but a support for the very special investigations carried out by Napoleone.

For Napoleone is subject to a profoundly anomalous experience: the psychic elements produced by his imagination, which he is the only one to see, interact with his perception of daily reality and communicate with him as in a dialogue, taking the shape of three bizarre figures called Lucrezia, Caliendo and Scintillone. For Napoleone, these three spirits, or elves, are the living evidence of the existence of a world different from the physical world he knows, but it is a world that has a tendency to interfere with the latter, and overturn his judgement on things, even radically sometimes. In the sequence of everyday events, as well as in the events that make History, Chance plays a crucial role. The name of the character itself, Napoleone, implies - somewhat ironically - the great charisma of this man, as well as the considerable physical and psychological energy that is indispensable for a person who, as he does, seeks to penetrate into the twists and turns of the human mind and face the enigmas of the unconscious.