The creators of Jonathan Steele

FEDERICO MEMOLA, the literary creator, (you can see him in the illustration by Sergio Masperi, here at the side of the text) was born in Milan on 8 October 1967, and obtained his high school Diploma from the Linguistic Lyçée. In 1990 he began to work with the team of the magazine "Fumo di China", for which he created the series "Moon Police Dpt" and he also wrote several scripts for "Intrepido". In 1993 he joined Sergio Bonelli Publisher as a member of the editorial board and as a script-writer; after writing Nr. 45 of Nathan Never, he was entrusted with the magazine Zona X, of which he became the editor. For the latter magazine he then created the series "La stirpe di Elän" and "Legione Stellare". Meanwhile, he also contributed to Legs Weaver, writing the script for the third Special together with Stefano Piani. 1999 saw the birth of the strip bearing the title of the character he himself has created, Jonathan Steele.

TERESA MARZIA, creator of the artwork,(you can see her self-portrait here beside the text) was born in Taranto o 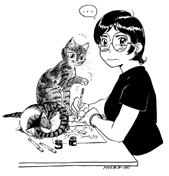 n 25 May 1966, and moved to the province of Bergamo a few years later, where she obtained her High School Diploma at the Artistic Lyçée. She subsequently attended the Comic Strip School in Milan, and after creating a few illustrations in the sphere of advertising (among which a "Barbie" coloring album), she made her début in the world of graphic novels with the series "Moon Police Dpt", in "Fumo di China". After contributing the artwork for a story in "Intrepido", she was "enrolled" on the staff of Legs Weaver, the series for which she created the artwork for Nr. 1 and nr. 25, together with Gianmauro Cozzi. She is also the graphic creator of the characters of the Jonathan Steele series, and is now a member of the Jonathan staff.