The dark side of magic: aliens, magicians, demons, mutants!

A former US aviation colonel and ex astronaut,

Thomas Rickman took part in the mission which landed on the Moon on 8 October 2011. On that occasion, unbeknownst to everyone else, his body was “invaded” by an alien organism which effectively killed Rickman and thereafter exploited his body as a shell to enable him to move around freely and pursue his own ends, subjecting other human beings to his own will as well. From that date onwards, “Rickman’s” political and military career really took off in a big way, catapulting him to a top position at the head of a project for constructing the first stable settlement on the Moon. This project was actually a front for the designing of a complex and gargantuan piece of techno-magic machinery whose purpose was to enable the Alien Creature to create an artificial black hole through which to absorb the entire planet Earth, because the Creature needed Planet Earth as a food source. However, barely an instant before the machine was completed, the plan was foiled by Jonathan, and during the ensuing battle both the Alien Creature and the body of Rickman were definitively eliminated.

Xenia Kristatos, an energetic but extremely ruthless woman, used to be the head of a terrorist organization denominated the Crimson Seven. She herself had no magic powers, but she often had recourse to the arcane knowledge of the magicians who worked for her. The Crimson Seven organization does not seek to acquire political power: its aim is purely economic aggrandizement, to be achieved by running and controlling criminal operations throughout the world. A few years earlier Jonathan and Xenia had met when they both belonged to a corps of mercenaries and they became lovers, but subsequently they found themselves bitterly opposed to each other, and Jonathan was compelled to kill her. Despite Xenia’s death, the Crimson Seven continues to exist, currently headed by Inga Beckmann. 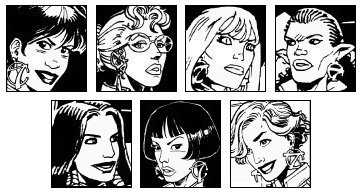 The Crimson Seven is a group of seven women, each of whom heads one of the Divisions that make up this criminal organization. All we know about them are their names: Carmen (Weapons and Field Operations Division), Renée (Medical Division), Ingrid (Biochemistry Division), Meredith (IT Division), Shana (Magical Arts Division), Oniko (Transport Division) and Nadia (News Division). Each of these seven placed an absolutely blind faith in Xenia Kristatos, whereas relations with Inga Beckmann are definitely more “tense”.

Inga Beckmann makes her debut as the assistant of an English Lord Jonathan gets into a fight with on a couple of occasions. Upon her master’s death, Inga is saved and then recruited by Xenia Kristatos, whose place she then takes at the head of the Crimson Seven. The reason why Xenia nominated Inga as her successor is still u

nknown to the other members of the organization, who are not too pleased with the arrival of this newcomer.

Ripley is a sinister figure from Jonathan’s past. Our hero hates him with all his might, because it was Ripley who first acquainted Jonathan with the horror of murder. But Ripley is not only the brute who tormented Jonathan’s childhood: he is also the man who guided Jonathan through his first experiences of life, protecting him and keeping him by his side.