Creatures born from myth who have survived the abyss of time! 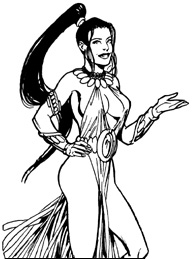 In ancient Greek mythology, Selene was a moon Goddess. The divinity that appears to Jonathan Steele in the first number doesn’t give any detailed explanations about her nature. She’s a lively and alluring girl, endowed with magic powers that are superior to those possessed by other human beings. In actual fact both Selene and innumerable other apparently supernatural beings, who in the past were worshiped as veritable divinities, are really magic creatures of a decidedly higher level: millions of years ago, following a clash with the alien invader and the ensuring devastations on the Moon, they withdrew into a sort of interdimensional limbo, where they can continue to survive and where they succeed in shaping the reality that surrounds them according to any whim or fancy that happens to cross their mind. But they can only get out from this limbo for short periods.

who has the name of an ancient Chinese moon Goddess, Ch’ang-O is, together with Selena, particularly interested in the destiny of Jonathan. Though her looks are decidedly oriental, she is less impulsive than Selena and more inclined to follow the rules, but often she lets her friend persuade her to make an exception.

Pandia & Endimione are two children who often accompany and assist Selena. Compared to Selena they are far more sensible. They almost act as Selena's conscience, and therefore are destined to be very frustrated.