Someone whom Jonathan, Jasmine and Myriam entrust with their own life...

n ex mercenary,an expert in locks and alarm systems (mainly on how to neutralize them), Max has experienced a physical mutation that has made him look like a tiger. He also has the power of becoming temporarily invisible.

a twenty year honorable career as a robber in the company of her husband (who died "on the job"), Rosalie retired to private life in the countryside of Perigord, in France, where she has taken advantage of her "savings". She is the owner of the house in which Jonathan lives, and very often, while he is away, looks after Sam.

In spite of her very young age,

Doris is a proper genius of mechanics and electronics, and this is the only worth-while reason why people might put up with her bad temper. Jonathan must thank her genius for his own flying machine and the numerous gadgets he often makes use of. 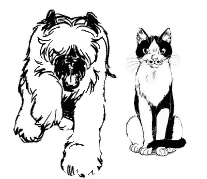 Sam, that big mass of hair someone defines as a "Briard" or "Brie-shepherd", is Jonathan's dog. It is still unknown how the two met and why Jonathan got himself a dog, but the thickest mystery, at least as thick as his hair, is: How can he see ? Oliver, on the other hand, is an Egyptian cat. After having been run over by a car he
was brought back to life by the Goddess Bastet, who, employed by Isis, used the cat as an informer during an adventure Jonathan and Myriam had in Cairo. Later, he let himself be adopted by none other than Myriam, and now lives with her in Paris.

in Rochefort, a Parisian police sergeant, is the reluctant source of information to whom Jonathan refers to now and again, when he is in need of information.

ora Galvez plays a fundamental role in Jonathan's life, having been his first love. Believed dead by Jonathan, she reappears on the scene unexpectedly, many years later, to ask for help from her former lover.

You can't exactly classify the members of the

Brummel family as friends, given the rivalry between their agency - they supply wizards and sorcerers - and Myriam and Jasmine's Magic Investigation Agency, but circumstances have often forced  them to set their professional jealousy aside and work together with the two girls.

The Brummel Agency, whose origins date back to no less than ancient Celtic druids, has its offices in London and is composed of Margareth (she's getting on a bit in years, but is still very energetic and makes her authority felt) and her three sons, Sean, Roger and Timothy, and also two twin cousins, Emma and Diana, the only ones in the family to be gifted with magic powers. They are a very wealthy and influential family, and can procure themselves whatever they need without any difficulty at all.

Isabel Fierro is a half-breed mercenary (or, at least, so she claims) who rather reluctantly threw in her lot with them during an adventure in Mexico, and has stuck to them ever since.
The pair, who immediately nicknamed Isabel "the nuisance", still know very little about her, and above all they are completely unaware that for some still undisclosed reason Isabel used to know Xenia Kristatos, the woman who had been at the head of the criminal organization known as the Crimson Seven.