Everything you need to know about Gregory Hunter

HOW DID THE GREGORY HUNTER PROJECT FIRST ARISE?
The 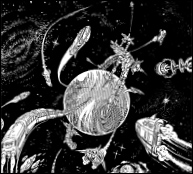 answer is very simple: out of pure passion. With Sergio Bonelli Editore what's important in opting for this or that stream of ideas is not the marketing strategies.
In this case, when I was thinking about drawing up plans for a new series, I had no hesitation at all in choosing the genre which I find increasingly congenial, namely science fiction. But this is a very different type of science fiction compared to the background that inspired Nathan Never. In the series I had created with Michele Medda and Bepi Vigna, realistic depiction was extremely important, in particular because Nathan's future is a future very close to the reality of our own time, both technologically and socially. In Gregory Hunter, things will be quite different. To make a comparison with cinema, if Nathan Never bears the imprint of the anguished atmospheres of "Blade Runner", Gregory Hunter, on the other hand, is much more similar in spirit to the "Star Wars" saga.

WHAT IS GREGORY HUNTER'S FUTURE LIKE?
It's the future I used to dream of when I was a kid, when I gorged on the classics of adventure and science fiction, even though I was perfectly aware we would probably never go and live on other planets. In this sense, one might very aptly define Gregory Hunter as a sort of "utopian" comic strip, because it somehow not only fulfils an old dream of the author's but also becomes a container of all the possible futures which, in actual fact, have never come true. 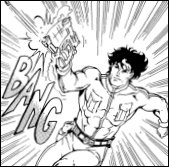 YOU PRESENTED IT PUBLICLY AS A SORT OF "TEX IN SPACE". WHY?
Well, actually, now that we've got the finished product I guess I should point out that Gregory bears a greater resemblance to Zagor than to Tex. But anyway, what I mean is that Gregory Hunter is designed to be a classical character, classical in the same way as Tex was - and still is - classical. But unlike Tex, who in many ways has more than a touch of rigor in the portrayal of his character, Gregory Hunter may be a bit over the top, even though he is unswervingly dedicated to his cause and is genuinely heroic. The allusion to Tex is evident above all in the narrative structure of the stories of my new character: the stories are going to be long and serialized, very similarly to the type of structure the Tex stories used to have and still do have today. In other words, there's a narrative continuity within each story, and a breadth of vision that can extend over as many as three albums.

WHAT ROLE DO THE SUPPORTING CHARACTERS PLAY IN YOUR SERIES? WILL THERE BE ANY RECURRENT FIGURES?
There'll be Badger, an alien who looks a lot like a monkey, and who will be at our hero's side throughout all his adventures. Also a female character, Sandra: and although she probably won't appear in absolutely ever story, she'll be quite regularly at Gregory's side, starting from nr. 2 of the series.

WHAT AUTHORS WERE YOU MOST INFLUENCED BY IN CREATING YOUR NEW CHARACTER?
Well, to some extent Hugo Pratt and his Corto Maltese, but also Jack Kirby and the Fantastic Four. But I can't possibly not mention all the classical French heroes who appeared in past years in "Corriere dei Piccoli", from Luc Orient to Bernard Prince, and who were protagonists of stories that blended science fiction with pure adventure. And as regards humor, I certainly owe a great debt to René Goscinny, one of the creators of Asterix.