Who is Gregory Hunter 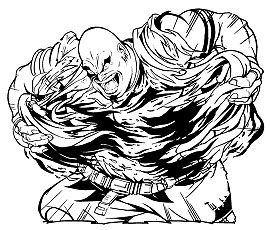 The virtually limitless expansion of mankind throughout the galaxy after the invention of the hyperspace engine has created no less than a veritable new Frontier… thousands and thousands of settlers have abandoned the earth, which was on the verge of the Third World War, and have gone in pursuit of the dream of a better world… but this dream has turned into a nightmare! The problem is that criminals of all sorts, shapes and sizes as well as unscrupulous wheeler-dealers with their business connections have also moved into space, often subjecting alien populations and creating powerful crime rings… And as if this weren't enough, the alien planets themselves often present insurmountable dangers to the settlers who venture out onto the land; as a result they find themselves facing an incredible array of situations, from the discovery of mysterious manufacts to clashes with horrible space monsters… And obviously, what's required to cope with all these problems is nothing less than a Space Ranger like Gregory Hunter!