My name is Gregory Hunter

Who is Gregory Hunter

Once a pirate and a bounty hunter, Gregory is a Space Ranger now... 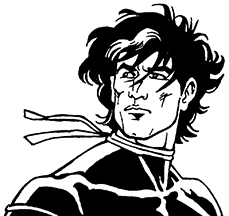 A square jaw, hooked nose, a decisive expression in his eyes, a burly physique - it only takes a glance at his physical appearance to realise that Gregory is one who has already seen it all. His riotous past hasn't yet been told, but the few remarks that have cropped up from time to time give us a glimpse of what he used to be like: he was once a pirate, and also a bounty hunter, and  even a soldier as well before becoming a Ranger and siding definitively with Law and Justice. Now that he's the adoptive son of Chris

Marderson, the head of the Rangers,Gregory is reluctant to talk about his life…but who are his real parents? And why does he avoid women? Where did he get that space-ship? As time goes by, all these questions (and others too) will gradually be given an answer.