Everything you need to know about Nick Raider
IN CHOOSING THE PROTAGONIST OF A DETECTIVE CARTOON, WHY DID YOU OPT FOR A HOMICIDE SQUAD POLICE OFFICER, WHO IS TIED TO RULES AND PROCEDURES, RATHER THAN A PRIVATE DETECTIVE, WHO WOULD HAVE A WIDER RANGE OF ACTION AND FREEDOM OF MOVEMENT?
First of all because the Nick Raider stories are not episodes; each story ends with its own conclusion and is usually developed in complete 94-page albums, which is not a sufficient length to build a very complex plot that also includes many action sequences. So we needed a format where an inquest could start straightaway. For a private detective, action must always be motivated by a customer going into his office and explaining how and why he or she cannot go to the police, while for a real police officer one phone call is enough 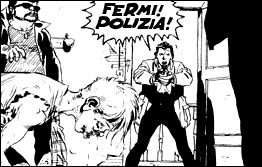 and the enquiry is off. Police officers are more credible in murder cases, as they are actually the only subjects who are truly qualified to deal with criminals: in reality, if a private detective finds a corpse, he calls the police. Private eyes follow unfaithful consorts. Insurance company investigators are only seldom involved in a murder, and the same is certainly true for old ladies living in country houses. Private detectives are linked to a particular season of strip cartoons, namely the Thirties and Forties, when Hammett and Chandler were the leading exponents of the genre, but they are anachronistic today. Moreover, the whole apparatus of patrol cars, officers in uniform, radio messages, technical labs and so on, offers a much more varied setting and is more suitable for the creation of co-protagonists. Nick Raider has a whole team of friends and collaborators around him.

WHY DID YOU CREATE A NEW YORK POLICEMAN INSTEAD OF AN ITALIAN POLICEMAN? THERE IS A WHOLE TRADITION OF DETECTIVE STORIES IN OUR COUNTRY AS WELL, AND WE HAVE MANY VALUABLE INSPECTORS, FROM SOLDATI'S MARSHAL ARNAUDI TO CAMILLERI'S MONTALBANO...
Apart from the fact that Nick is of Italian origin, there are two main reasons why we chose to make him a New York police officer. Two quite different reasons. The first is that the legendary aura of adventure (detective stories) is still an American phenomenon, in spite of Camilleri - who was not yet famous, anyway, when Nick Raider was created. One thing is to say:

"Hands up, Frank!", quite another is: "Hands up, Francesco!" The phrase: "There's been a murder on First Street" sounds much better than "There's been a murder in Largo Garibaldi". We have a sort of habit of looking at American police officers as cult figures, while we don't have the same feeling with Italian police officers. Detective stories set in Italy will inevitably take on a flavour of Italian comedy. New York's skyscrapers have a greater charm than the apartment blocks in our suburbs. And the second reason is: American themes are "vaguer" than Italian themes. A detective story set in Italy would be too risky from the point of view of reality, because it would inevitably be related to present-day situations; political themes would be involved too, whereas adventure stories are meant to sublimate real facts and be universal, and they shouldn't age too soon. And there is also a third reason: New York is the great melting-pot, a crossroads of cultures, populations, trafficking, problems; it is therefore a perfect setting for a spectacular theatre with the widest possible range of representations. A more natural and better setting than any other city in the world.

WHAT'S THE BEST DEFINITION OF THE GENRE OF THE NICK RAIDER DETECTIVE STORIES?
These stories can be associated with more than one stylistic trend. Sometimes they are like the so-called "whodunit" stories, where the discovery of who committed the murder is the final surprise and the whole story tends towards that end. At other times, actually more often, they seem closer to the hard boiled or the noir or thriller genres. They're almost always action stories similar to TV films of police stories set in a metropolitan environment. However, I think there is one definition that describes this type of stories more than any other: police procedural. It is the sort of detective story of which Ed McBain is a real master and whose protagonists are the police officers of the 87th District. The enquiries are carried out by real policemen in a real district, according to the normal procedures used by investigative squads. McBain's stories have more than one protagonist, the whole team of cops is the protagonist, and each officer has his or her own qualities and faults. There are good cops and bad cops, and the reader will become familiar with each one of them while following them story after story not only during enquiries, but also in their private affairs, in their personal joys and tragedies of everyday life. The Nick Raider adventures have different aspects because action and plot predominate, as in an adventure cartoon, over dialogues and psychological insight, but there is still a focus on the personalities, characterization and private life of every character, starting from Nick's. In fact, over time we have learnt many particulars of his previous life and family. 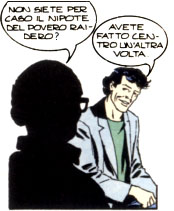 S NICK'S FAMILY COME FROM ITALY?
Yes, Nick's paternal grandfather's name was Nicola Raidero: he went to America in 1928 to try his luck together with his wife Francesca. They left their place of origin, a small village lost in the Tuscan Apennine mountains, and when they landed in New York their name was transcribed with a mistake, so the whole family changed their surname into Raider. Nicola Raidero, who gave his name to Nick, died shortly after his arrival in the States by falling from scaffolding during the construction of a skyscraper, when his son John, born in 1929, was only four. Nick's mother, Liza, is Irish.

WHAT DO WE KNOW ABOUT NICK RAIDER'S CHILDHOOD AND YOUTH?
When he was a child, Nick had a positive and affectionate image of John, his father, who was a police officer, but there was a breakdown in their relations during Nick's adolescence, when conflicts arose with his father. This was due both to the inevitable generation differences and to the fact that the boy blamed his father for the crisis that had begun to drive a wedge between his parents and undermined their marriage. On discovering that her husband was having an affair with another woman, Nick's mother had a terrible shock that worsened her already unstable psychological conditions and plunged her into a catatonic state. She never recovered from this depression and for a very long time 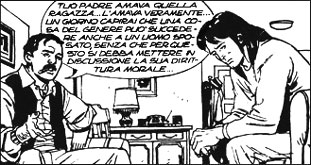 Nick blamed his father for her condition; moreover, he was angry with his father for reporting a colleague to the authorities, albeit legitimately, (later, after reaching greater maturity, Nick does the same). At the end of the umpteenth quarrel, young Raider had completely lost his confidence in his father and left home, living for a while as a drifter. He returned home only after his father's death in 1972. His mother is still alive and lives in a clinic for mental patients, where he visits her now and then. Nick also had a sister, Jenny, born from his father's relationship with a young police officer, Norma Butler, but the girl was raped and killed by young louts in the small village of Northport.

IF NICK RAIDER HAD SUCH A TROUBLED RELATIONSHIP WITH HIS FATHER, WHY DID HE DECIDE TO FOLLOW HIS FATHER'S STEPS BY JOINING THE POLICE FORCE?
After the dramatic events that led him far from home, Nick has begun to have a better understanding of his father and manages to evaluate him more leniently. Gradually, his love for his father is revived, partly in the light of his personal experiences. So much so that his decision to enlist in the police force is also due to his need to pay a sort of debt to his father's memory. In addition to his father, Nick's second source of strength has been lieutenant Rayan, an old family friend. Furthermore, Nick fought in Vietnam in the ranks of the military police, where he was trained by sergeant Rafferty, who succeeded in forging and strengthening his personality. Once back in his homeland, Nick starts a career as a officer on patrol in the Bronx and undergoes a training period under the careful eyes of another mentor: Abraham Reginald King, called Blackbear. 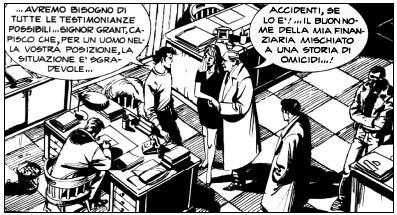 T WHY, IN SPITE OF ALL HIS SKILL AND SUCCESS IN HIS INVESTIGATIONS, IS NICK RAIDER NOT HAVING A SPARKLING CAREER, WHY IS HE NEVER PROMOTED, WHY DOES HE NEVER RISE TO A HIGHER RANK?
Because he's an honest and bold cop, he's not afraid to tread on the toes of bigwigs, as often happens when he is leading a case involving politicians or powerful businessmen, and he doesn't even fear his superiors. This attitude has ended up by earning him many enemies occupying high-ranking positions, including top police commissioners, whose prevailing philosophy is to prevent Nick from having too much power and stirring up hornet's nests. But Nick Raider doesn't let it brother him and keeps on fighting his own battle as a simple detective of the Homicide Squad, the best detective in the Central District.

IS NICK RAIDER'S FACE REMINISCENT OF ANY PARTICULAR ACTOR?
When Claudio Nizzi, Nick Raider's creator, entrusted the illustrator Claudio Villa with the task of creating the character's appearance, he mentioned, as a reference, the actor Ryan O'Neal and, in particular, the character he played in the movie The Driver. But later on, as Nick passed into the hands of many different illustrators, but most of all as the character evolved in each story, his face ended up by looking different -a not uncommon development- and he took on different expressions and contaminations. So now it's not difficult to recognize certain features of the young Robert Mitchum. Finally, however, it can be said that Nick Raider has his own face, a face that might look a bit similar to some other famous person, but without being the double of anybody in particular.