The creator of Nick Raider

A short biography of Claudio Nizzi 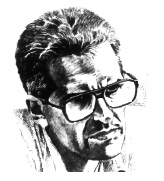 was born in Setif (Algeria) in 1938. and started his script career on the pages of "Il Vittorioso", in 1963. After that, he experimented with almost every genre: from African adventures (with "Steve Damon") to sea voyages (with "Captain Erik"), from abridgements of the literary classics, "I promessi sposi", "L'isola misteriosa", "Un capitano di quindici anni" to westerns (his most popular strip before Nick Raider was a western, "Larry Yuma", a gunman whose gaze was constantly hidden under the brim of his cap), and even love stories and humorous strips. But, of course, detectives were bound to have a place in his career as well, and so you meet Lieutenant Mario or the funny Rosco & Sonny, the protagonists of adventures that are often more romances than detective stories. Thirty years ago or so, Nizzi started to alternate with Gianluigi Bonelli writing the scripts of Tex, a task he has taken on with great skill and mastery for many many years. In 1988 Nizzi created , the first detective story published by Sergio Bonelli, which he also supervised until 1992, when, due to the heavy commitment required for the writing of the Tex stories, Nizzi appointed Renato Queirolo as the supervisor of the series, while continuing to write stories for his new hero.