The world of Nick Raider

New York, the "Big Apple". An urban jungle where living is difficult and dying is easy!

igh-speed chases weaving dizzily through gridlocked city traffic, flights and wild chases down fire escape steps, ill-famed neighbourhoods and crumbling tenement buildings, jet-set criminals, petty thieves and hardened gangsters - all these make up the background of Nick Raider's enquiries. We are in New York, the "Big Apple". but also a violent city, an urban jungle with eight million people and four murders per hour. To capture and arrest the people guilty of many of these crimes is the task assigned to Nick and the very close-knit team of Manhattan's Homicide Squad. In a "police procedural", 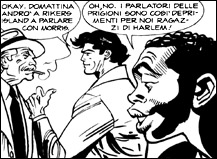 the detective is entrusted with investigations, and this is a very important feature of the story, but the contribution of forensic medicine or laboratory analysis is frequently crucial for the solution of a case. Comparing fingerprints is an old but always useful technique and a few traces of saliva on a fag end can reveal the DNA of the suspect, while the analysis of a piece of cloth may lead to identification of the murderer. The Nick Raider series is characterized by tense dramatic atmospheres, although it also allows scope for more relaxing moments of humour. Thanks to the skills and talent shown in his work, Nick Raider is sometimes contacted by a top FBI officer, Max Random, who entrusts him with particularly dangerous enquiries on a totally confidential basis, offering our officer the opportunity to act beyond his jurisdiction. These are the occasions on which Nick abandons his customary New York environment and the whole world then becomes the theatre for his adventures.