Alfie, Jimmy Garnet, lieutenant Rayan. But, most of all, crazy Marvin Brown! 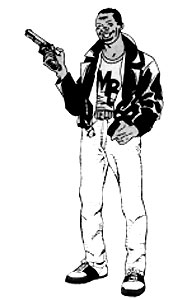 He is thirty, black, very lively and extroverted, a great talker and a man full of witticisms, constantly looking for the right joke to relieve the tension of such a risky job. Nick and the other colleagues of the squad willingly tolerate this apparently light-hearted approach, because they know very well that when action starts Marvin Brown knows how to become a perfectly efficient machine.

Arthur Rayan, informally called Art, is approaching his sixties. He has achieved the rank of lieutenant by many years of absolutely honest hard work. A calm and fatherly man with all "his boys", he feels particularly affectionate towards Nick, whom he met when he was younger and helped in a difficult period of his life. Married and already a grandfather, Art smokes cigars and never takes his hat off. Although we almost always see him sitting behind his desk, he is the true director of the entire squad. Thanks to his long experience, he immediately recognizes the difficulties and dangers involved in an enquiry and often tries to stem Nick's impetuousness, but he is equally quick to defend him against the hysterial attacks of Captain Vance, the classic type of opportunistic burocrat.

Jimmy Garnet is the youngest member of the squad. Fair-haired and shy, his age is not specified, but he's around twenty. He's a computer expert and a bookworm who loves to spend time in the archives; it is often thanks to his archive research that he can provide Nick and

Marvin with the correct information and clues to point their investigations in the right direction. 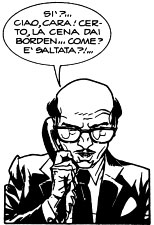 Philip Vance is the captain of the squad, in other words the Boss, the one everyone has to square things up with. Aged about 50, he's a perfect burocrat, constantly harassed by his despotic wife who calls him on the phone all the time and makes him feel embarrassed in front of the others. This is the reason why Nick has renamed him "Hello darling". But Vance's only concern is to prevent complaints or protests by the District Attorney's Office or the Mayor's Office. Very frequently, when kowtowing obsequiously to requests - some of which not always completely legitimate - coming "from above", he stands in Nick's way and triggers bitter conflicts that only "old Art" (who is a friend of both) manages to settle. 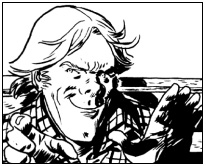 Alfie is Nick's privileged informer. He's a dwarf and he's so short that he needs to climb on a chair to make a phone call from the bar that is his customary residence. He holds his own job as a spy in great esteem and never accepts payments when he thinks he doesn't deserve a reward. He lives amid the dregs of society and always has very up-to-date knowledge about everything: that's why his "tip-offs" often shed light on the background of murders and crimes. 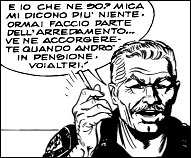 Ward Mulligan is the sergeant who's constantly on duty behind the desk at the entrance of the Police Department. He's cheerful, good-natured, a great joke-teller, but a very good-hearted person, doomed to be always on the front line in the most desperate human cases.

Officer D’Angelo, a bespectacled Neapolitan, carries out all the small tasks at the Department, but his real mission is to walk among the agents' desks and distribute cups of coffee, which, according to him, are the unsurpassable product of mysterious mixtures, although everyone actually finds it them absolutely awful. 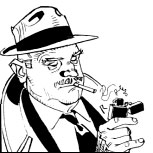 ieutenant Bowmann, around 50 years of age, is the head of the Special Scientific Department. He's always present at crime scenes, where he puts his men to work and keeps Nick Raider promptly informed of the results of his investigations. He is a man with brisk manners, but he is absolutely reliable and professional.

Doctor Blum is the anatomo-pathologist who's never short of a corpse on which to carry out a postmortem examination. Living in close and continuous contact with death in the gloomy environment of the morgue, he has developed a great inclination towards black humour. A corpse often has many things to reveal and doctor Blum is certainly the right man to grasp all its secrets.

Mcgraw has by now come to be considered as Nick's steady girlfriend, even if he is reluctant to commit himself to a permanent relationship, partly because of the risks implied in his job and also due to a traumatic family event he suffered during his childhood. But Violet, a talented reporter who works for the Herald, is a clever and very charming woman and hopes she will be able to make him change his mind. And since Nick Raider is increasingly tending to put an end to his occasional flirts with the other girls so as to have time to be with her, she is on the way to success.

Sarah Himmelman is a strong-willed thirty-year-old who used to wear a cop's uniform, but now she's left the police force due to her difficult character and to the narrow-mindedness of some of her former bosses. She has now started her own career as a private detective. Nick Raider holds her in great esteem and she often works on some of the most difficult cases with him.

Mary Ford is one of Nick Raider's colleagues at the district. She's also a former girl-friend of Nick's - but that was before Violet arrived. Mary is still in love with him and accepts to work with him on particularly risky cases, where the presence of a female officer is deemed to be indispensable.

renda Stacy is a very attractive blonde, who looks quite like Marilyn Monroe. She's an FBI agent and has worked with Nick Raider on two cases that took them to California and Italy, where she gave proof of her courage and skill in the use of weapons.