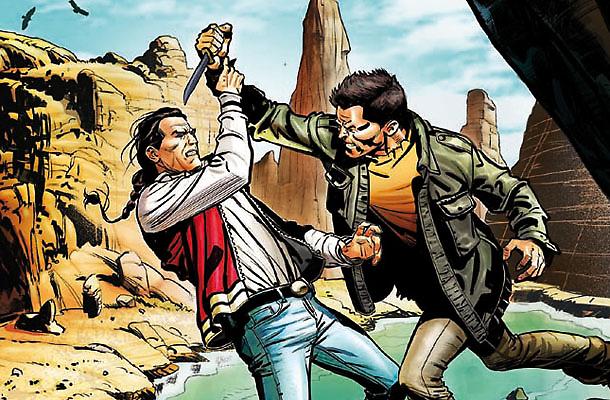 The world of Saguaro

Window Rock, Arizona, 1972. The Navajo reserve hosts many natives that still live in poverty, while landlords and corporations make their dirty businnesses...

In the early 1970s, America feels fragile, shaken by the last aftermaths of an unprecedented military defeat and by the turmoil still brooding in the different social strata. The same period is a dramatic time for the Natives, left alone or vexed by unjust governative politics. The Indian Resistance is active, though: after the demonstrations of the 1960s,

groups of activists occupy Alcatraz Island (1969), march on Washington (1972) and take other, sometimes desperate and dramatic, actions, aimed to awake public opionion (such as the armed occupation of the village of Wounded Knee, South Dakota, in  1973). In this difficult times, Saguaro goes back to Arizona, after a long series of adventures in the army, ended by the release after the wounds he suffered in Vietnam.

Our hero goes back to Window Rock, the capital town of the Navajo Nation, and finds the great reservation mainly unchanged: most of the Natives still live in poverty, the landowners still do what they want and the corporations exploit the lands notwithstanding the treaties, with the collusion of the local politicians.

Due to the shady relations with the central government, the powers of the Navajo Tribal Police are restricted and the most important cases are entrusted to White federal agents who don’t know the reservation, the language and the local traditions. The vice-director of the Federal Bureau in Albuquerque, Clive Waters, through their mutual friend Art Parker, asks Saguaro to create a special unit, that will have its HQ next to the Tribal Council and the Bureau of Indian Affairs. This way, Waters hopes to “communicate” with a complicated and closed world, that has its own codes and history, and an underground current of rage and desire for revenge. Saguaro, who lived with the White men for a long time and seems to have steered away from the Navajo “Way of Beauty”, will soon find out he needs to reckon with a painful past, the land he was born in, and, above all, his own conscience.