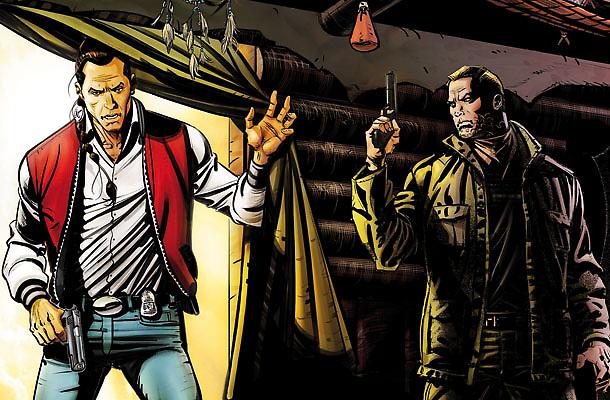 A soulless landowner, the gruff Chief of the Tribal Police, a vengeful ex-soldier and an old friend looking for revenge!

NOAH FOLSOM
Folsom is a rich White landowner, who’s utterly scrupleless and used to manipulate people. He loves living large and doing things in a big way. He settled in the Navajo reservation years ago, buying land and investing money to create an image of respected benefactor. His purported activity is import-export trade, farming and breeding. But he really lives on smuggling, drug peddling and other dirty deeds. He has corrupted Tribal policemen and above-suspicion FBI agents on his payroll.

ALAN WALKEN
Captain Walken is a no-nonsense, rough White man. After marrying a Native woman, he was accepted by the community and managed to become chief of Window Rock Tribal Police. With the sudden death of his wife, Walken lost his direction and became an alcoholic. In the past, the chief arrested the hot-headed Saguaro more than once and now he’s convinced that, though he lived for many years outside the Reservation, the man hasn’t changed. Alan Walken deeply loves his daughter Kai, although he doesn’t understand her thoroughly, the same way he never accepted the complicated local tradition. The only laws he abide to are those determined by the government and Tribal Council.

COBRA RAY
Aka, Ray "Cobra" Brest: his muscled body is for the most part devastated by bad burns. It was his comrade in arms, Saguaro, to provoke the burns, during a dramatic action in Vietnam. Since then, Ray’s mission has always been to make Saguaro pay for it; his goal, though, is not to kill him, but to strike him through his loved ones, transforming Saguaro into a “monster”. A sadistic, cunning and intelligent man, Ray knowns the dark sides of Thorn’s personality and past, and his only goal is revenge.

NASTAS BEGAY
Little brother of Howi’s helper, Yanaba Begay, Nastas has the same age of Saguaro and had been his best friend during their “forays” as young men. At the time, Saguaro and Nastas shared some ideals, but not all: Thorn Kitcheyan already refused to follow the rules of the People. In time, they took different paths and lost contact. Today, Nastas is a member of a group of activists for the rights of the Natives, openly against the Federal government, that has connections outside the Navajo Reservation. Disillusioned by life and the institutions, Nastas is seeking revenge for the way his people is treated.