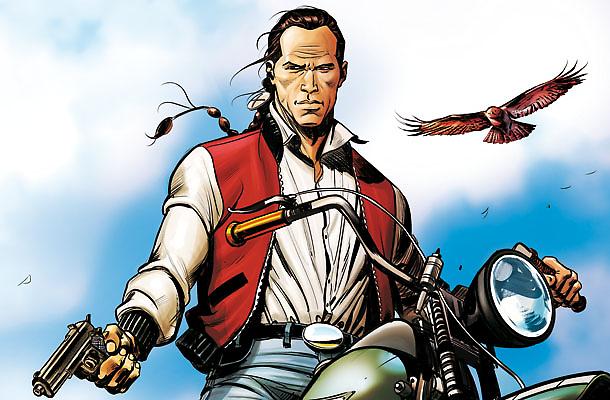 A medicine man, a young and fierce policewoman, a redskin lawyer... and a hawk that soars the Navajo reserve's skies!

Howi Benally
Howi is an old Navajo who runs the Buen Retiro ranch, once owned by the Kitcheyan family. As a young man, he worked as a homesteader for Saguaro’s father, and Saguaro grew up listening to his advice and watching him perform his rites.Yes, because Howi is a "hataalii": a singer, a medicine man whose task is performing traditional rituals and songs, more often than not organized in complicated cerimonies, for chasing away evil, bring luck, or more simply give back to the ill persons their harmony with the world around them and the Sacred People. Howi is a well-respected figure in the Native world, although he seems more comfortable as a complaining and ailing old man than in his “official” role.

The daughter of the Captain of the Window Rock Tribal Police (Alan Walken, a white man) and of a Navajo woman, Kai is, at least at the beginning, a policewoman as well. She will soon be trusted by Saguaro and she’s ready to help him with his Federal investigations. Kai is a strong woman, with a tough and resolute approach. Clever and keen, she knows how to hold her own, verbally and phisically. A good shot and a brave woman, in some situations she prefers to use her mind. On the contrary of Saguaro, who’s ready to break rules to attain his goals, Kai is quite faithful to her duty.

Miguel Aguilar is an 11-year old Mexican kid, who’s entrusted to the care of his aunt Hermila. Bright-eyed and with a contagious smile, Miguel is very curious, and he often finds himself in trouble because of this. Aunt Hermila is the sister of Miguel’s father’s: a diminutive but great woman, she’s skinny and seemingly stern, but she’s very strong-willed.

Art Parker
A lawyer working for the court that rules about the Native-on-Native crimes, Art is an old friend of Saguaro and Howi’s, and they often engage in passionate discussions. Art and Howi have a different approach to life in the Reserve: while Art is totally rational, Howi is a traditional (and “mystical”) man. While considering himself as a ”modern” Native, Art has an utter respect for his land and history; but he knows that, in order to protect his brothers’ rights, it’s necessary to fully understand the laws of the White man. 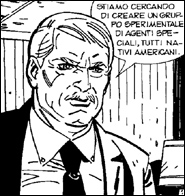 Clive Waters
Vice-chairman of the Federal Bureau in Albuquerque, Clive is a cultured, intelligent and open-minded person. He’s often clashing with his boss, the obtuse Russel Green, a member of the "old school" FBI, not too inclined to follow the recent openness politics of the Goverment toward the Natives. Clive, instead, counts several Indians as his best friends, such as Art Parker, the lawyer (who was a college friend of his).

Jude Towanka
Reckless, stubborn, young and impetuous, 22-year old Jude was practically “adopted” by Saguaro’s mentor, Howi. The young man grew up in a local fosterhouse and he never knew his parents, but he’s sure his mother was a Navajo, and he’s actively trying to find his origins (and his tribal “clan”).

Little Eye
A Harris hawk (Parabuteo unicinctus), also known as a wolf-hawk, because it usually lives in "families" of several individuals that hunt as a pack. Differently from his peers, Little Eye prefers to live alone — a common trait between him and Saguaro. Little Eye doesn’t take part in Saguaro’s adventures, but the hawk can be considered as a friend for him: it was the first living creature to welcome Saguaro back when he returned to Window Rock, and it still goes to pay a daily visit to his isolated and dusty mobile home, between the rocks and the road.