Everything you need to know about Demian
WHAT ARE THE MAIN SOURCES OF INSPIRATION OF THE SERIES?
The Marseilles setting certainly stems from my passion for the novels by Jean-Claude Izzo, the author of "Total Chaos", "Chourmo" and "Solea". This is a trilogy whose protagonist is Fabio Montale, an offbeat police officer who’s bound up in stories of organized crime in which his own city, Marseilles, features as a veritable protagonist. As you leaf through the pages of Izzo’s novels you soak up the atmosphere of the capital of Provence, imbued with a sense of melancholy that mesmerizes the reader. I feel I also owe a debt to Jean-Patrick Manchette (the author, among other works, of "Morgue Pleine" and the recent "Ô dingos ô châteaux"), and to classic thrillers such as "Grisbi" by Albert Simonin and "Rififi and the Women" by Auguste Le Breton, not to mention the fabulous "Duri a Marsiglia" by Gian Carlo Fusco. 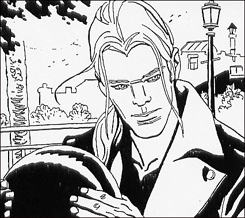 AND WHAT ABOUT THE WORLD OF CINEMA? WHICH MOVIE DIRECTORS HAVE INFLUENCED YOUR APPROACH TO STORYTELLING?
I’m a great cinema lover and I try to “pinch” the secrets of some movie directors who have used the medium of images to tell great “noir” stories, and other genres as well: François Truffaut, for instance, the author of the disturbing "The bride wore black", but also and above all movies that focus on the relation between man and woman like "Jules and Jim" or "The Woman Next Door "; Luc Besson and his “Leon”, violent and romantic at one and the same time; John Frankenheimer and Michael Mann, the authors of modern "noir" such as, respectively, "Ronin" and "Collateral". I like the fast-paced montage of Tony Scott’s movies. All these names could be ideal movie directors for a hypothetical (well, you never know…) film on Demian.

WHAT DID IT FEEL LIKE WORKING ON A MINI-SERIES, A PUBLISHING FORMULA THAT HADN’T YET BEEN LAUNCHED AT SERGIO BONELLI EDITORE WHEN THE PRODUCTION OF DEMIAN BEGAN?
I think a mini-series gives its author the chance to work in the framework of a closed structure, with very close continuity between the stories. This makes it possible to keep the unfolding story under careful control and, in a sense, to put a more personal touch on it compared to more extensive series where, more or less necessarily, there is an alternation among a number of different script-writers.

WHERE DOES THE NAME DEMIAN COME FROM? HOW WAS IT CHOSEN?
It’s not easy to find the right name for a character. I was looking for something evocative, suited to the picture I had in my mind and to the rendering on paper given by Alessandro Poli. It had to be something that didn’t sound English, and of course it was essential to avoid any resemblance to the names of the protagonists of other comics already in print. To decide on the right name I trawled the Internet, browsed into novels, French telephone directories and even a list of “Breton names”. And in fact Demian really is a Breton name, the equivalent of the Italian “Damiano”. This struck me as absolutely perfect! Once I’d chosen the name, I discovered that “Demian” is also the title of a wonderful short novel by Herman Hesse, which however belongs to a completely different genre than our series.

IS DEMIAN’S FACE INSPIRED BY THE COUNTENANCE OF SOME PARTICULAR ACTOR?
At first, 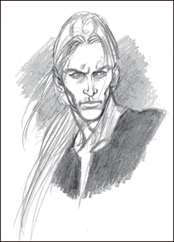 when Alessandro Poli and I started defining Demian’s appearance, we had in mind the dashing actor Vincent Perez (who’s very popular in France, less well known in Italy) who starred in films such as "Cyrano de Bergerac", "Beyond the clouds", "The Crow: City of Angels", "Fanfan la Tulipe". But little by little Demian moved away from his model. His features changed, his hair, physique and build, as well as the way his eyes are set, became quite original, unique in fact, through Alessandro’s inspired strokes. Now, in his definitive version, one might say that Demian looks like no-one other than himself. And actually, this seems to have made things easier for the illustrators. All of them, when working on our hero’s physiognomy, “got it right” practically the first time. And then each of them got into the spirit of the character, enriching him with expressiveness and personality in a way that was a real surprise and satisfaction for me.