My name is Demian

Angel or demon? Murderer or avenger? His past veiled by the shadow of mystery, his future hinting at a mission to be fulfilled…

His name is whispered in the alleyways of Marseilles and is is familiar throughout almost the whole of the Mediterranean. He instills fear in wrongdoers, but he’s respected and admired by those who owe their safety and wellbeing to his providential intervention.
Demian is in his early thirties. He’s tall, blond, with longish hair that’s always a bit untidy. His strange lavender-purple eyes give the impression of being able to penetrate deep into the thoughts of whoever he’s talking to and they have the knack of making you feel really ill at ease if you’ve got a slightly guilty conscience. He’s a man of action, Demian is, but only when the situation calls for a show of determination. He likes spending time with friends or in the company of a cute girl. He loves reading poems, he enjoys fine food and drink, and he appreciates being able to savor the small pleasures of life, because nobody can be a hero round the clock. 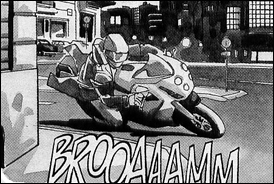 human side to him that emerges not only from these passions but also from his fundamentally romantic temperament. His past remains largely mysterious, but he bears an indelible sign of it on his own body. Emblazoned his chest, just above his heart, is a most unusual scar: it is shaped like a sword and there are some who say it’s the symbol of a legendary caste of knights, the “Fraternité”. Maybe this is really true: perhaps Demian genuinely is one of them, a modern Chevalier, the last of a race of heroes whose origins are lost in the mists of time.
Once, these men’s “raison d'être” was simple: fighting against oppression, and defending the innocents. They would be summoned to the courts of the great kings and entrusted with the most risky missions. But in the Marseilles of our own time this is a far more complicated undertaking, because the differences between the goodies and the baddies have become blurred, almost intangible, and there’s always someone plotting away in the background. So who should one side with? Demian has made up his mind: he is going to be the master of his own life and take charge of his actions by himself. Aware that the sword he bears on his chest will, after every adventure, gouge a new wound in his soul!