Everything you need to know about Brad Barron 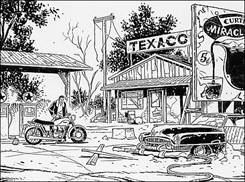 SET IN THE FIFTIES OF THE LAST CENTURY: WHAT PROMPTED THIS CHOICE?
Well, I think the USA of the Nineteen Fifties is like a vast territory which by now belongs to popular imagination. It's an environment we're all familiar with, that's been celebrated and has become legendary through the motion pictures of the era (especially the sci-fi movies) which have become cult films. This mythic atmosphere has been further enhanced by the subsequent literary and television productions.Nineteen Fifties American costumes, and all the paraphernalia, hairstyles and technology are immediately recognizable and easily understandable: they don't need to be explained to the reader and so they are straightforward and, I repeat, familiar. In some respects, I see the popular image of the Nineteen Fifties as comparable to the icon of the Western with its image of the Frontier. Both historical periods were rich in marvellous discoveries and trail-blazing achievements, but also in tremendous contrasts: these were eras that constituted the ideal hotbed for the genesis of heroes.
WHY DID YOU OPT TO DEVELOP A MINI-SERIES RATHER THAN A MORE TRADITIONAL SERIAL UNFOLDING BY INSTALLMENTS?
Brad Barron sprang up in my mind as a series with a precise beginning, a development and an end. The way I conceived it, although this mini-series comprises a number of different narrative genres, it benefits from a very strong narrative coherence. I think that as the readers follow the gradual unfolding of Brad's adventures, they will realize that one of the strengths of this project lies precisely in the fact of its being a closed formula.
AS A SCRIPT-WRITER, DO YOU THINK THERE ARE ANY DIFFERENCES BETWEEN WORKING ON A MINI-SERIES VERSUS A REGULAR SERIES?
On this occasion, I benefit from a number of advantages as a script-writer. For instance, I can afford not to dilute the "coups de theatre" very much: metaphorically, you might say that within the space of a year and a half of publication I can shoot out all the arrows I feel I have in my quiver. Obviously, I hope to hit the target and to succeed in riveting the attention of comics aficionados and of all those who are mad about adventure in general.
Another advantage is not having to re-establish the "status quo" at the end of each episode. Brad Barron will not leave the reader with the reassuring feeling, once the monthly album is closed, that after the adventure is over everything will go back to the way it was before. Since the series describes a dramatic and extreme situation, it will be pervaded by a vague aura of uncertainty about what fate is going to befall the characters. An aura which I hope will keep the readers glued to the albums from month to month.
WILL 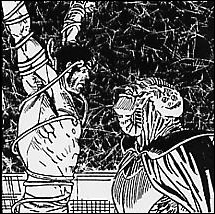 BRAD BE AWARE OF THIS UNCERTAINTY TOO?
Well, Brad will often be in danger, obviously. So will all the people he meets or who share in his adventures side by side with him. Brad's certainties were swept away on the day of the invasion: now he has to start all over again. He will be an evolving character and will be capable of changing his mind about things (about the state of the Earth, the people who dwell on Earth, the Morbs, the future of his own world) as the situation around him gradually alters. He will have to learn to adapt, mentally as well, if he wants to survive!
IN 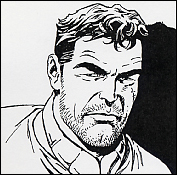 HIS PHYSICAL APPEARANCE BRAD BARRON SEEMS TO BEAR SOME RESEMBLANCE TO THE ACTOR GEORGE CLOONEY. CAN YOU TELL US HOW TOU WORKED OUT THIS CHARACTERIZATION OF THE FIGURE OF BRAD?
You're right, originally we started out from a photo of Clooney, taken from a scene in "From Dusk till Dawn", the film by Robert Rodriguez where the actor, in tandem with Quentin Tarantino, was engaged in furious shoot-outs with bloodthirsty vampires. In that photo Clooney was depicted with a very determined expression, reminiscent of an old-style "tough guy", which I found very charismatic.
I suggested it as a starting point to Fabio Celoni, the current cover illustrator of Brad Barron, who worked on the graphic definition of the character. That specific photogram was the only precise reference Fabio actually worked on. Over time, Brad has begun to take on more personal characteristics. He certainly has a rather more powerful build than the original model, and he's acquired the scar on his face; another aspect - and this is what I like most - is that I now even feel he has a touch of Mister No about him…