My name is Brad

A man who chose not to give up and never surrender to the terrible threat of the Morbs.

Brad Barron is a fairly normal sort of guy, who, on the day of the invasion by the terrible Morbs, suffers the loss of his nearest and dearest: his wife Gloria and his young daughter Lucy.

Brad Barron is a man who is active in the world of science, a professor of biology who has authored a treatise on several hypotheses concerning extra-terrestrial life - hypotheses he has the occasion to put to the test, despite himself, on his own body… Brad Barron is a former soldier: He's a veteran who fought with the United States army during World War II, taking part in the Allied landing in Normandy, where he was rewarded with two medals for military valor, an indelible scar on his face and an aching burden of bitter memories rooted deep in his soul. Brad Barron is a prisoner, inmate Number 9, one of the guinea-pigs the Morbs like to pick on for their experiments: tenacious, tough, almost uncontrollable, and this makes him particularly interesting for extra-terrestrial scientists to study.
A lone wolf on a quest to seek freedom, for himself and for his world that is crushed in the iron grip of an alien race determined to transform him and his ilk into a colony.A man without peace searching for his lost family, against the backdrop of an America where the dream of prosperity and the good life of the Fifties has been shattered by the dreadful invasion. It's an adventure that will lead him to become acquainted with the many faces of human nature, the virtues and wickedness of terrestrial beings: from the desire for deliverance to the desperation at seeing their own way of life change, perhaps for ever, as a result of an uncontrollable event in the form of an onslaught rising from the depths of the cosmos.
Br 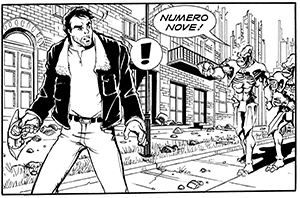 ad's quest knows no respite, constantly harried as he is by the enemy breathing down his neck. Thousands of ordeals await him on his path - from terrible alien creatures that try to block his way to clashes with Morb soldiers - and all this amid the hardship of trying to survive on a planet Earth where the invasion is wreaking dramatic changes. In his stories, Brad will be caught up in adventures linked to the most disparate narrative genres: from science fiction to the hard-boiled, from horror to the western, from noir to romantic drama.
A hero out of necessity, on whose steadfastness the destiny of the whole of mankind seems to depend.