A short biography of Claudio Chiaverotti 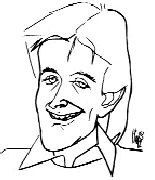 was born on 20th June,1965, in Turin where he lives and works. He came to the comic-strip after a rather troubled period. At first he studied to be a dental technician, then he enrolled in the Faculty of Law. It was in 1986 that he entered the world of fantasy, writing the scripts for Bonvi's "Sturmtruppen". He began to work for Sergio Bonelli in 1989, making his début with album no.34 of Dylan Dog, "Il buio". An author of considerable depth, for a long time he took over from Tiziano Sclavi in producing the Investigator from Hell stories. He also contributed to Martin Mystère and X Zone, later inventing his own character, Brendon, a knight errant set in a world devastated by a dreadful disaster which happened more than a hundred years ago, an event which is hinted at by the term "Great Dark Age".