Alfredo Castelli answers to your questions

Everything you need to know about Martin Mystère

WHEN ARE MARTIN AND DIANA GOING TO GET MARRIED?
This is definitely the question Martin Mystère's readers ask most frequently of all. Evidently his readers are romantic souls. Diana and Martin have been going steady ever since the Detective of the Impossible's adventures were first published, and actually it is indeed high time they were properly married. Castelli - Good Old Uncle Marty's humble biographer - has good reason to suspect they may in fact already have got married, namely in December 1995, but he doesn't have any real solid proof that the marriage ceremony genuinely took place: if it did, it was certainly a very very private ceremony. Anyway, if that's really what happened, you can be sure that sooner or later Martin Mystère - he's a great racconteur and once he starts talking things eventually come out - won't manage to keep it a secret any more and will release a public declaration. 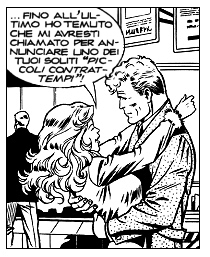 MARTIN MYSTÈRE HAS A "DATE OF BIRTH" AND HE'S NOW WHAT YOU MIGHT CALL "MATURE". WHAT WILL HAPPEN WHEN HE GETS REALLY OLD?
This is the second most frequently asked question, which the authors of Martin Mystère inevitably find themselves having to contend with whenever they have any kind of meeting with the public. Ever since the very beginning of the series, Nr. 1., Martin has had a date of birth, June 26th 1942; consequently, when the first issue was published in 1982, Martin was exactly forty years old, so now he must be nearing sixty. But there were worries even when he was approaching fifty: many of the younger readers (who consider fifty-year-olds as real oldies about to drop off the twig) wondered what was going to happen in the future. The FAR (Frequently Answered Replies) to these FAQ (Frequently Asked Questions) are the following: you can choose one, two or even all three of these replies.
A - For mysterious physiological reasons, comic strip characters - lucky, aren't they - grow old much more slowly than in the real world, and Good Old Uncle Marty is no exception to this rule. For instance, he didn't begin to wear reading glasses until he was already way over fifty, whereas most people with ordinary good sight become long-sighted at about forty.
B - In the story Affari di Famiglia Martin received a gift from his long-lived uncle Paul: it was an Indian potion that slows the effects of aging. Evidently, he's beginning to use it.
C - When Martin, Java and Diana become too too old, the series - if it still exists by then - will undergo a shift of style and will become a soap opera like "I ragazzi irresistibili". 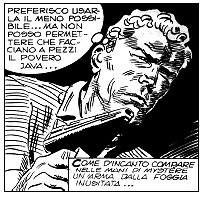 WHY DON'T THE RAY WEAPONS APPEAR ANY MORE?
The third most frequent question. Martin Mystère and Sergej Orloff were both given a ray weapon endowed with different powers (one is capable of killing, the other paralyzes momentarily) by the Buddhist monk Kut Humi, who predicted that the two characters "would each make different use of them". And in fact, as it has turned out, Orloff utilized his weapon - the one that can kill - for evil ends, while Martin has used his only to defend himself. As told in the story in Martin Mystère Gigante n. 2, fate had designed a specific destiny for Martin which involved his literally forgetting all about the existence of the weapon for quite a long period; during this period, the weapon was left closed up in its hiding place (the false bottom of an aquarium) for years. After retrieving it, Martin only found himself in need of it on a very few occasions: in fact, it's actually lost its powers and only works in certain very special situations. During this same episode, Orloff lost the artificial arm in which he had hidden his own weapon. That weapon was recovered by the men from Elsewhere, and found again during the era of Nathan Never amid the ruins of the base. Ironically, it was then planted in a sort of cybernetic clone of Martin Mystère, who "lives" in the future. 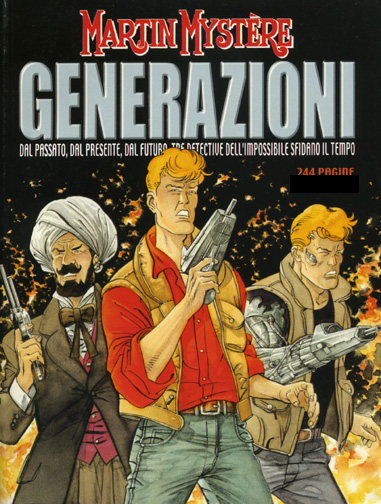 WILL THERE BE ANY FURTHER MEETINGS BETWEEN MARTIN MYSTÈRE AND OTHER BONELLIAN CHARACTERS?
After the two meetings between Martin Mystère and Nathan Never, the two meetings between Martin Mystère and Dylan Dog  (see "Martin Mystère e Dylan Dog - Ultima fermata, the one with Mister No (See Mister No Special N. 8), who also appeared as a " guest star" in several stories of the monthly series (see nrs. 2, 3, 62, 219, 220), there are at present no plans for additional "team-ups", at least in the immediate future. According to the "philosophy" of the publishing house, these meetings should occur only on really really special occasions, and they shouldn't become a sort of habit that would simply end up by generating confusion. However, there is a common  element shared by the Detective of the Impossible and several other characters: namely the base of Elsewhere, created in the pages of Martin Mystère, which appears in his "in the future" (version in Nathan Never and in the "of the past" version in a story from Zagor nrs. 428, 429, 430 which correspond to nrs. 377, 378 and 379 of the Zenith publication). The annual publication Storie d'Altrove tells about episodes that occurred at various times during the history of the base. Mentions of the past of Elsewhere are also found in Martin Mystère Gigante Album nr. 1 and nr. 191 of the regular series. 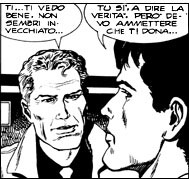 ARE ORLOFF, MISTER JINX, MR. MIND, AND SO FORTH GOING TO COME BACK?
Yes, sooner or later all the supporting characters and the most colourful "baddies" of the series will come back, although we can't specify exactly when.

WHERE CAN ONE FIND THE MARTIN MYSTÈRE STORIES PUBLISHED OTHER THAN IN THE BONELLI PUBLICATIONS?
The original publications are extremely difficult to track down. Some stories, for instance, were published as serials in newspapers or in limited circulation magazines, or in local editions of public and private Bodies. In order to find these, it's necessary to turn to bookstores that specialize in comic strip "antiques". However, all these stories are regularly reprinted by the publication called Extra, in which they alternate with reprints of the Almanacco del Mistero and the Speciali estivi. 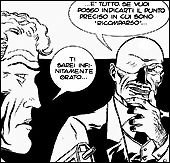 À PROPOS OF REPRINTS, WHY DOESN'T TUTTO MYSTÈRE COME OUT ANY MORE?
Tutto Mystère was the publication that reprinted the back issues of the monthly series, in revised edition, and this publication ceased at nr. 127. This is the destiny that sooner or later awaits all "Tutto" publications (TuttoMisterNo and TuttoZagor also stopped at a certain point). The fact is that there comes a moment when reprints no longer have any sense because the development of the story-line of the series has reached a point - impossible to calculate a priori - at which the majority of readers started to collect the series and therefore aren't interested in purchasing a duplicate. As a consolation to those few who feel nostalgic for a reprint, all the stories of the Detective of the Impossible are reprinted in large books - available both in soft cover or hard cover - as part of the publication entitled "Martin Mystère - L'Integrale" published by Hazard Publications.

CLOSING QUESTION: WHY ARE THE MARTIN MYSTÈRE STORIES OF INCONSTANT QUALITY? SOME OF THEM ARE REALLY GREAT, WHILE OTHERS WOULD BAR ELY BE GIVEN A PASSING GRADE…

We will close the FAQ section with this particularly embarrassing question, which we will try to answer clearly and very simply. Martin Mystère - and all his "serial" colleagues - devour ideas with the speed of a powerful hydraulic pump: 94 pages a month, every month, for years, without counting the special albums, the "non-series" publications and so forth. A truly frenetic rhythm, unfortunately imposed by the Italian market which, in contrast to the situation in France, won't accept characters coming out at more relaxed intervals. "Now and then even the great Homer sleeps", thus runs a celebrated phrase of Latin origin, suggesting that even in a great writer like Homer the quality sometimes slipped. But the authors of the enormous quantity of material described above are not Homer, nor even are they juke-boxes where you can put a coin in the slot and automatically obtain a story: that's why, sometimes, you find those famous sudden changes in quality, although although the authors always seek to uphold their commitment to maintaining professional standards and are constantly sustained by the aim of doing even better.