The world of Martin Mystère

Italian press frequently devotes articles to the Detective of the Impossible. In most of these, Martin is treated like a person in flesh and blood: readers and journalists have fun believing that he's a person who really exists, and that Alfredo Castelli - the author of the series - is simply his biographer. Washington Mews, the New York street where Martin "lives" at the non-existent 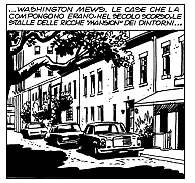 Nr. 3/a, has become a veritable place of pilgrimage for readers, a bit like Nr. 221/b Baker Street in London, the imaginary residence of Sherlock Holmes. In the Martin Mystère stories, the reality we know is never "modified": there are never any epoch-making changes (an earthquake destroying New York, invasion of extra-terrestrials, or anything like that). Martin Mystère mysteries take place in our own time and all over the world, and although they are the product of imagination they are set against a rigorously real background. To enhance the realism of the series, great attention is paid to the documentary aspects. The stories often actually constitute a pretext to investigate and shed light on some little known historical episode, or to focus on places from all over the world, talk about other civilizations, folklore, legends, curiosities. 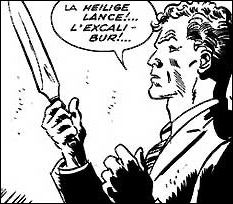 Furthermore, there's always an undercurrent of conservationism and pacifism in all the stories. In particular, if you follow the Mystèrian saga you can learn about events that science and historiography have sought in vain to elucidate (the cause of the explosion that destroyed a vast area of the Tunguska basin in 1908; the mysterious origin of the Etruscan civilization, the truth about the discovery of America). Also, you can learn about the real origin of all sorts of nightmarish (Frankenstein's monster, the Werewolf, The Vampire, the Golem), the secret of the Graal and the nature of the "Sacred Lance"; you can also visit the caves of alchemists and witches, the fantastic kingdom of the Little People and the fabled "lost worlds" (Agarthi, the impenetrable underground headquarters of the "King of the World"; the legendary Avalon and the fable-like Never-Never-Land, the inaccessible "City of Ethereal Shades", the mythical "Kingdom of Prester John", the vanished continents of Atlantis and Mu). And this is not all: you can evoke demons and ghosts, you may come face to face with legendary heroes such as King Arthur and his Knights of the Round Table as well as the heroes of the mythology and religions of all times. You get a chance to break impossible secret codes, decipher ancient writing systems, learn about unknown alphabets; you can grasp the magic sword Excalibur, clash with the grim powers of the "Skull of Destiny", or penetrate into the hiding place of the Ark of the Covenant, learn unknown details about the lives of Moses and Christopher Columbus, William Shakespeare and Leonardo da Vinci 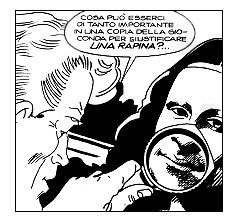 ; you may also encounter literary figures such as Sherlock Holmes, Peter Pan, Alice in Wonderland; you will explore the incredible and unknown powers that are concealed within the human mind, or you may clash with the invisible powers that are plotting secretly in the wings and which, step by step, are influencing the evolution of the world;

alternatively,  as Martin's followers, you may be witness to close encounters of the second and third type; you may become acquainted with the most amazing forms of life and travel with them through the immensity  of space; you may discover the unsuspected infl

uence of alien presences on the history of mankind. Both in the comics and also in the commentaries that often accompany them, Martin Mystère's attitude towards the unexplained and the inexplicable is never fanatically oriented in one direction or another. This objective approach has made the character particularly appealing to the world of education and culture: Martin Mystère often functions as a testimonial for the general public in exhibitions and cultural events organized by public and private associations.