Sergio Bonelli replies to your questions

Everything you need to know on Mister No

IS IT TRUE THAT YOU'VE PUT A LOT OF YOURSELF IN MISTER NO?
In a book about this character it was suggested that Mister No was a play on words and should be considered as short for Mister Nolitta, since Guido Nolitta is the pen name that I use to sign my scripts. The truth is that every author puts something of himself in his creations, even though I have to admit that this is particularly true as regards Mister No. When I wrote Zagor I had a great time robbing the warehouse of my imagination that I had filled by reading many books and strips and watching every possible kind of film. But in Mister No I used my experience as a traveler, which took me to Amazonia in the years when Manaus and the surrounding forest were far from the madding crowds of the tourist circuit. Moreover, Mister No is more similar than Zagor to my personality, my ambitions and our time; this enabled me to use him to give vent to my manias, from jazz music to the cult phenomena of the fifties.

WHEN DID YOU GO TO AMAZONIA FOR THE FIRST TIME? 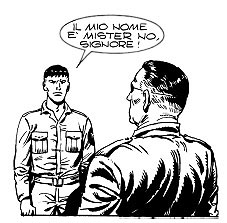 In 1968. Manaus was still totally isolated from the rest of the country and its small airport had only two weekly flights coming in from Belém. But the river traffic was very lively, with its big boats penetrating deep into the jungle: you could cover the first part of the journey along the course of the Rio Negro or Rio Solimoes but then you had to resort to a canoe to travel up one of their tributaries and reach into the heart of the great forest. Manaus was then the only access to the Amazonian forest: it was a town steeped in meanings about the jungle. However, my first journey was a bit of a disappointment. I had gotten as far as Manaus with the intention of finding out a bit more about the town and then venturing into the jungle, but I couldn't implement my plans; I couldn't find a canoe or anybody willing to accompany me into the forest. At that point I decided to give up and accept the drowsy laziness of the town and I spent my days wandering  from one bar to another, exactly as Mister No does when he has no customers to take around. There was a bar called Hotel Amazonas, like the one frequented by Mister No: a place with its own squalid charm where I was once obliged to have coffee without sugar - it tasted really bitter - because the ship that brought in supplies of sugar hadn't come for the last twenty days. But in spite of all this, I left with the feeling that I wanted to go back there and try again. In later journeys, I did finally succeed in penetrating into the deepest parts of the forest. For a long period of my life I went to Amazonia almost every year. Today, so many years later, the Manaus of that time doesn't exist any more; now it's a completely different town, full as it is of concrete, roads, noisy people and wilting tourists. Anyway, more recently, my preferred access door to the Amazon forest is via the Orinoco river and its tributaries, at the border between Brazil and Venezuela. 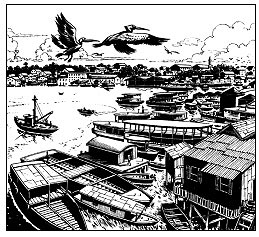 HAVE YOU EVER EXPERIENCED DANGEROUS OR PARTICULARLY EXCITING SITUATIONS DURING YOUR ADVENTURES, MAYBE WITH THE INDIOS OR WITH WILD ANIMALS, AS HAPPENS TO MISTER NO?
I'm light years away from being the model of the self-sufficient explorer and I can hardly open a can of tuna fish by myself. In some of the most difficult journeys I was looked after by my travel mates, who were certainly less clumsy than me, as they could, for instance, repair the engine of the canoe or build a decent camp. I am not a particularly bold man, so the extreme and very dramatic situations that Mister No experiences in his adventures are only the fruit of my imagination, often fantasized during the long and tedious canoe trips while the boat silently slides on the water for hours and hours, leaving your mind free to wander. I am absolutely charmed by these long moments of idleness where you lose all notion of space and time and you allow your fancy to indulge in flights of imagination. Nonetheless, my Amazonian journals are not at all boring or devoid of thrilling situations, trials and tribulations and emotions, as shown by my booklet "Ciao Amazzonia" (Hello Amazonia), enclosed in the Mister No Special no. 4. In that booklet I told the story of my most interesting experiences, selecting them from among those that inspired some of my favorite stories about my pilot.

BUT THE ITINERARIES OF THE TRAVELER SERGIO BONELLI DO NOT ONLY INCLUDE AMAZONIA, EXACTLY LIKE MISTER NO ALSO TRAVELS BEYOND BRAZIL. IS IT BY CHANCE OR NOT THAT YOU HAVE BOTH TRAVELED AROUND IN THE AFRICAN CONTINENT?
Of course, it isn't. I often go to Africa, most times together with my anthropologist and ethnologist friends who go for professional reasons and for purposes of study, not just as tourists. That is why I deemed it a good idea to change the setting for Mister No's adventures from time to time, and plan a long period of his life in Africa. That absorbed my attention for over three years of publications, between 1989 and 1991. At the beginning I was convinced I'd manage to write all Jerry Drake's episodes in Africa by myself, but then time revealed itself as a hard master,

my commitments as a publisher became more urgent and I passed the scripts over to the others - Mignacco, Ongaro, Castelli. But anyway, I kept something for myself as Guido Nolitta, namely the stories that took place in my favorite regions, such as the desert, the Mau-Mau land and the Zulu Special.The adventure among the Sahara "blue men" is my special favorite, precisely because I love the desert. And that sounds very strange, if you consider the huge difference between the desert and Amazonia: you can completely improvise in the desert, while Amazonia has tracks you're necessarily bound to follow - the rivers or the trails in the jungle. Amid the dunes a traveler can go wherever he wants. The Sahara desert is one of the last places in the world where you can pass a fortnight without seeing a human being. The Tuaregs loom suddenly out of the sand haze; they exert a fascination that derives partly from their regal gait and appearance, as well as from the extreme dignity that you feel even in the humblest people.

IS IT TRUE THAT MISTER NO WAS INSPIRED BY YOUR ENCOUNTER WITH AN AUTHENTIC SOUTH-AMERICAN PILOT WHO WAS VERY SIMILAR TO YOUR CHARACTER?
Yes, it was in Palenque, Mexico, that I met a very nice and even good-looking young man in a crumbling airport. He wore a leather jacket and his name was Captain Vega, a name that was absolutely perfect for a comic strip hero! He had a belt with a gun and traveled with his aircraft up and down the Yucatán, from one hacienda to another, transporting small animals, vegetables and all sorts of supplies. Whenever he saw a tourist, he simply lifted the back of the passenger's seat and said: "Ok, I'll take you wherever you want!" So I conceived the idea of creating a comic strip character who made his living on a Piper, but I decided to transfer him into Amazonia. 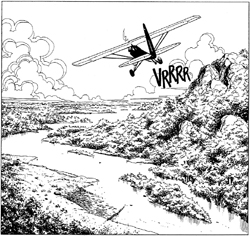 WHY DID YOU SET MISTER NO STORIES IN THE FIFTIES?
Because at that time the Amazonian jungle was still one of the last worlds of adventure left on our planet; it was a wilderness, mostly unexplored, inhabited by populations who had previously had very little contact with white civilization. It was precisely between the Fifties and the Seventies that the Villas Boas brothers established their first contacts with the Xingu tribes, and it was toward the end of the Fifties that the first missionaries arrived among the Yanoamas. Everything was still possible in those years: tribal wars, disappearing expeditions, hidden ruins, lost treasures. The only way to travel in Amazonia at that time was on foot or by canoe or plane. Today almost everything has changed: some of the places which are described as pure virgin forest in the Mister No stories are now bisected by the Transamazonian highway, and sometimes, where there was once a village of Indios, now there is a shabby motel. But still, why the Fifties and not the Thirties, for example, when Amazonia was even wilder? Or even Amazonia in the last century? Because by going excessively back in time I don't think I'd have found better stories - instead, there would have been more monotony. I think that from the point of view of adventure, a "transition period" is much more interesting as the many contradictory impulses and stimulating conflicts provide the narrator with greater opportunity for intrigue: conflicts between Indios and colonizers, between the forest and civilization, between past and present. Most western stories are set toward the end of the period in which the West was won, precisely because it is a period that offers the widest variety of possible scenarios: battles with the Native Americans, outlaws, cattle breeders and ranchers against simple farmers, railways, etc. Before that, there is much less and after that, there is nothing. To my mind, the Fifties in Amazonia corresponds to that magic moment in the West. Furthermore, this chronological choice allowed me to introduce jazz, cinema and the fabulous women of the Fifties in my stories. 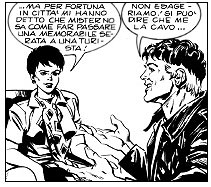 AH, YES… WOMEN! IN MISTER NO THE SCENE IS INVADED BY ALL THE FEMALE CHARACTERS THAT WERE LACKING IN ZAGOR AND TEX.

Like my father, Gian Luigi Bonelli - Tex's creator - I have always considered the role of the protagonists' girlfriends in the most traditional comic strip adventures as rather cumbersome, from Gordon's Dale to Mandrake's Narda, from Superman's Lois to the Masked Man's Diana. Therefore in Zagor, rather than having the hero constantly embroiled in struggles to rescue an eternal girlfriend, I elected - since this is a classical adventure series - to do without the presence of such a figure. In contrast, with Mister No, who is a more modern character, it seemed inevitable to me to allow women to express their potential. All the beautiful girls Jerry Drake occasionally meets are not looking for a formal commitment and do not tie him down in his journeys and adventures. Furthermore, in order to avoid falling into the usual stereotypes, I made an effort to tell the stories of our hero's girlfriends in various shades of gray, i.e. the girls are not naïve goody-goodies. So overall, thanks to Mister No I was finally able to represent some parts of the female universe that are usually given short shrift by serial comic strips.