Merciless adventurers, profiteers, smugglers, killers… cruel men who transform the paradise of Amazonia into a hell!

Mister No has no recurrent enemies. 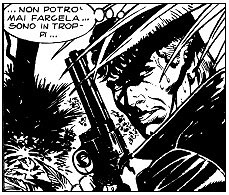 His opponents are often presented as friendly pleasant persons who only later reveal their ill intentions: for example the adventurous North-American explorer who asks Mister No to take him to an inaccessible spot of the Amazonian forest is actually a killer who has to honor a "contract"; the generous fazendeiro who offers the pilot hospitality turns out to be a vile slave trader; the tough and thoroughly honest police officer who ensures justice in the metropolis is actually a bent officer operating on behalf of crime rings, and so on.

Sometimes, the enemies that Mister No has to face are rebels, Indios who are fighting to defend their land against the greed of so-called "civilized" people; or poor peasants who have taken up arms like ancient cangaçeiros to fight against harsh abuse inflicted on them by all-powerful landowners; or uncompromising idealists who end up going way beyond the limits of fanaticism. In Mister No stories the "baddies" are never simply cut-throats or the sheer embodiment of evil: rather, they are contradictory figures and, in a sense, our hero can often sympathize with their reasons because he knows what grievous wrongs they have suffered.

But when things turn really nasty, Mister No does not shrink from his responsibilities.

A case in point is the Japanese character Ishikawa, a sort of merciless alter-ego of Mister No, whose sense of honor leads him to disrupt Jerry's life totally, to kill some of his friends and trigger a bitter chase. Mister No eventually defeats him in a duel fought to the death in the New York docks. 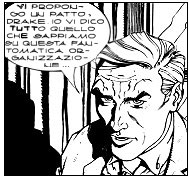 Also worth mentioning is Hiden, an unscrupulous CIA agent who reappears in more than one story, jeopardizing Jerry's life. It is Hiden himself who commands Jerry never to set foot in the United States again after his latest adventures there.