Jerry has plenty of girlfriends, virtually one in every airport! Charming, but also brave women capable of getting out of trouble by themselves.

Women play an important role in the Mister No stories. The pilot has ever so many "girl friends", virtually one in every airport, 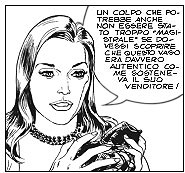 but he's not the type of guy to commit himself to a "serious" relationship. Mister No's partners are always self-sufficient and independent-minded modern women, even though the comic strip series is set in the Fifties.

Here are some of the main female protagonists who have appeared more than once in this series: the North-American archaeologist Patricia Rowlands, who often involves the pilot in the hunt for vestiges of ancient rui

ns; the passionate Miranda Cordeiro, the daughter of a Sertão landowner, who is central to almost all the adventures  that take place in this area of Brazil; the reckless aviator Debora ; the CIA agent Delia who spins the web of Jerry's intrigues between the U.S.A. and South America;

the three cute "garotas" - Madalena, Irene and Maria who run the bar Ipanema in Belèm, but have also practised - and will in the future practise - their profession in many other places in wild Brazil; the former pilot Barrett Whitaker, with whom our pilot has an affair.

One woman from the last New York period deserves a special mention, Darlene Faithful, an unmarried mother who gets very deeply involved with Jerry, but then their love story is suddenly broken up by the mandatory departure of our hero from the United States.