Old fellow soldiers and fellow adventurers who risked their lives with him around the world. First and foremost: a German, called Esse Esse. 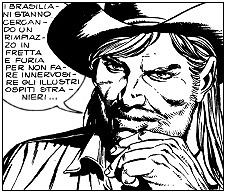 Mister No has lots and lots of friends and they're very attached to him. He has friends virtually everywhere: old fellow soldiers from past wars and new friends he's met during his travels in Brazil and South America. The most important among them is certainly Otto Kruger, called Esse-Esse, a German veteran who, like Mister No, chose to live in Manaus, far from the madding crowd of the so-called civilized world. Esse-Esse is a former German soldier, but he's not a Nazi: he was involved in a war that he was forced to fight in through no choice of his own. He never took part in the notorious SS - he was simply given that nickname by the Brazilians, who vented a certain degree of black humor on him. He's a master in using the knife; he's harder and more cynical than Mister No and when he has to kill someone he just does it, without ceremony. Moreover, Otto Kruger is the protagonist of a parallel mini-series divided into episodes with 32 comic pages each, telling the adventures he had when he went back to Germany after the war. The discovery of the horror of the concentration camps drove Kruger to hunt down Colonel Wolfe, his former commanding Major in the Afrika Korps and director of the Kirkenburg concentration camp. It is a "journey to the end of the night", that leads him into the very heart of the Asian jungle and turns him into a wanderer without a homeland. The former German soldier has to face up to the mistakes and horrors of his generation, a difficult and troubling theme, which is addressed in a type of language that is quite unusual for a "popular" comic strip.

Another important friend of Mister No's is Phil Mulligan, one of his former fellow soldiers from the time of the war in the Pacific, who is now a private detective in New York and writes detective stories whose protagonist is called… Jerry Drake!

Additional former fellow soldiers are presented in many other stories, among whom one must certainly recall

: Alan Chambers, currently a ranger in the Colorado National Park on the Rocky Mountains, and Steve Mallory who became a corrupt FBI agent after the war and was killed by Mister No in Italy in 1948. Mister No doesn't have a constant "foil" in his adventures, but there are several recurrent characters who crop up in his stories set in Manaus, the town set deep in the Amazon forest.

For instance, the bartender Paulo Adolfo who runs the saloon where Mister No likes to linger over his drinks; Sergeant Oliveira the head of the police officers who often arrest the "gringo" for trifling reasons (but mainly because of Mister No's aversion towards any form of power); the cheerful "garotas" (girls) Clara and Isabela,

in whose house the pilot often spends pleasant evenings; the airport mechanics who take care of his shabby Piper

(the amusing Augustino dies in episode number 241 and is replaced by the black mechanic João); Celestino, who is another of the Amazonian guides, is a tattooed Indio brought up in a boarding school; Luna,

a charming and mysterious palmist, who is unerringly spot-on in her guesses about the future of skeptical Jerry; Mama Rosa, Celestino's (adoptive) mother, who also has ten or so children of her own.

Mister No often makes friends with many different sorts of musicians, like Dana Winter, a North-American jazz singer,

Curtis Gray, an unlucky saxophone player who dies at the end of a New York story, and Olinto Righetti, a "famous Italian baritone". In almost every city he goes to, our pilot meets bartenders, girls, mechanics, police officers and musicians: the "small theatre" that revolves around him when he's in action in Manaus is reproduced everywhere with the same fixed roles, in Bahia just as in Rio, in Cairo just the same as in New York.