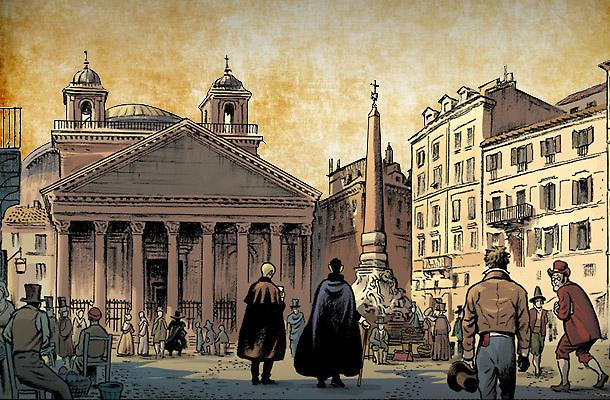 The world of Mercurio Loi

Mercurio Loi's stories begin in Christmas 1825 and 1826 New Year's Day. It's the era of the Papal State, a period when the Pope became a king and ruled Rome with the steely fist of an absolute ruler. The backdrop of Mercurio's adventures is a portrayal of the city, with real historical figures mixed in with characters from the popular tradition.

It is also the time of the Carbonari lodges in Rome, with protagonists as the vernacular poet Giuseppe Gioachino Belli, Pope Leo XII, or the governor of Rome and head of police Monsignor Tommaso Bernetti. We will meet priests and brigands, the chief executioner Mastro Titta, flight pioneers as Pasquale Andreoli, astronomers, mad scientists, and Ghetanaccio, the most famous of the Roman puppeteers.

Among the fictitious characters of popular culture, we find the masks of the Roman vernacular theater: Cassandrino, Meo Patacca, Don Pasquale, General La Rocca, and Rugantino.

A particular relevance goes to the figure of Pasquino, an iconic statue where people attached public satires against public figures and politicians. Pasquino here is a real person, hidden behind a mask, that the Papal Carabinieri are endlessly hunting for.

19th century Rome is a place full of enigmas, secret societies, mysterious rituals, and unnerving characters connected to the esoteric and occult practice. Our stories take place on this border between light and darkness, among images and symbols from 3000 years of history, often concealed in monuments that are under everybody's eyes.

Rome, in 1826, is a city of madmen.
Everybody jumps to reach the moon, but no one can touch it.
Nonetheless, everyone goes on jumping.
Rome, in 1826, is a city of masks.
Everybody has a dual identity.
They protect their secret one by putting something on their faces,
hiding it behind the front doors of their houses,
disguising it in the darkness of the night.
That's why nights here are full of surprises.
And that's the time Mercurio Loi loves the most,
when he goes out there, in the streets, and search.
Along the river,
in back alleys,
on the roofs,
chasing the moon,
in a city of madmen.