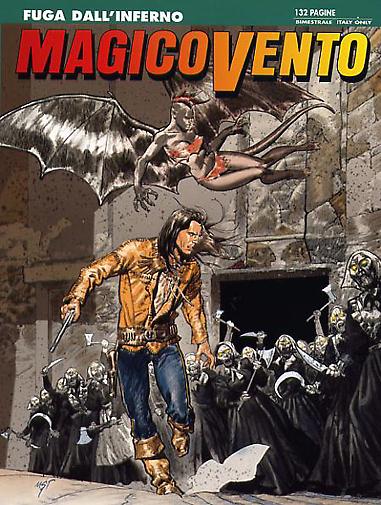 Introduction: While Ned is fleeing from the Reign of the Ancient Ones, Poe finds the trail that can take him to Aiwass!

Hordes of demons and ghastly creatures are barring Magico Vento’s way as he tries to make his escape from the underground labyrinth of the Reign of the Ancient Ones. But he is also on a race against time because the Great Exit Door is about to open, and if the necromancer Aiwass were to manage to cross the threshold before him, Ned would be trapped for ever in the reign of the Dead. Meanwhile in Providence, Poe – who is looking into the local mysteries – uncovers a trail that leads him to Aiwass: the story of Adam Stewart, a mysterious Vampire hunter who vanished into thin air long ago. What links this implacable enemy of Evil to the Necromancer who brazenly flaunts his allegiance to Absolute Evil? Soon all will be revealed in a final furious hail of gunfire.