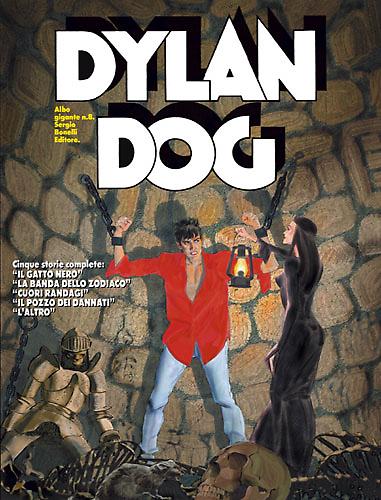 
Graham Parker, an attorney, has always loved animals, and they have always reciprocated his love… Until today. His friends have jettisoned him to accommodate a pestilential black cat, a bad-tempered and obstinate animal. Where does the hateful creature come from? Is it a nightmare or the shadow of a regret, of a story forgotten long ago?

There’s something moving over the rooftops of London: under the night-time sky a gang of criminals is carrying out its obscure designs. They are acrobats of sky and of life, prepared to face the ultimate risk hanging only from the light of stars, united like blood brothers. But something has broken down in the Band of the Zodiac, and its members begin to die… Title: Cuori randagi
Subject and script: Tiziano Sclavi
Artwork: Enea Riboldi

He was a real pig, a bastardly pimp, and it’s hardly surprising if one of “his” girls has finally decided to do him in. But is Jo Beth really guilty? Only old Botolo can exculpate her, but how on earth do you get a dog onto the witness stand?

Does the ghost of the Blackmoors really exist? A flurry of sinister and ominous presences are crowding into the castle, but perhaps they don’t come from beyond the grave, perhaps they are made of flesh and blood. The mystery seems to vanish, falling into the well that opens underneath the foundations… Dylan Dog senses that the infestation is just a pretext. Mr. Hendricks has invited him for quite a different reason: to ensnare him in the lethal vise of a death-trap!

We are never completely alone, inside us there’s always a restless half ready to break free. Dylan Dog has found his, swallowed up by his nightmares and thirsting for blood. An insane admirer who wants to take his place, or the curse of the double? Whatever the answer, now he has to confront his eternal antagonist, he has to challenge and defeat… The other!