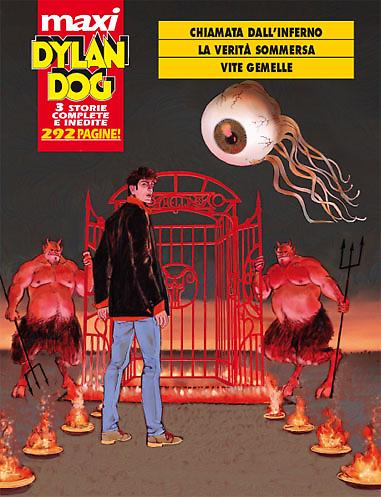 Introduction: An SMS that announces death… a horde of underwater zombies… a woman that somebody is repeatedly killing…

A series of people find death in the strangest ways— their only connection is the fact that, some days before their end, they received a message on their phone, telling them the time and place of their death. And the next on that list is nobody else than Dylan Dog!

The village of Cromagh isn’t anymore: it was flooded a century ago to create an artificial lake. Apparently placid and quiet, its waters hide scary truths, that are now resurfacing under the guise of a strange fog that leaves no escape to the people that cross its path...
Vite gemelle
Plot and script: Giovanni Gualdoni

Lydia, Dylan Dog’s new customer, says she assisted to her own homicide, in what could have been a sort of unlucky premonition. A story nobody wants to believe in, the Nightmare Investigator included; but he will begin to have doubts when other women, identical to Lydia, will start dying, one after the other...