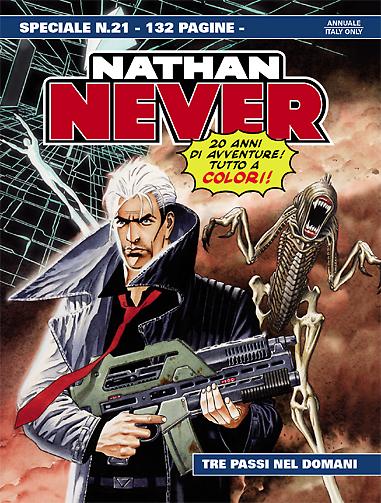 Nathan Never plunges in cyberspace, looking for three million credits vanished in an investigation he conducted with government agent Forbes several months before, with the help of Dieter Harper, a hacker who died during the same investigation. Who’s the mysterious man who’s trying to get in touch with Jenny, Harper’s widow, from the Web?

Another war just ended. War relics are scattered everywhere in Adlan City, killing and maiming the children who play in the city streets. Young Shady seems to be one of this victims, too, but when the boy is kidnapped from the hospital with a commando-like action, the Federation ask Agenzia Alfa to investigate. Nathan and Legs Weaver will have to find who’s responsible, and what’s hiding behind that strange kidnapping... Futuro
Plot and script: Antonio Serra
Artwork: Roberto De Angelis

All the planet’s volcanoes erupt at the same time, because of the ne, crazed domination plan by Aristotele Skotos! All the forces of Agenzia Alfa struggle to stop the catastrophe and evacuate the city, while the Earth is at risk of being covered in ashes. Nathan, Legs and the other Alfa agents spring into action… but what’s the truth hidden behind this shocking series of events?