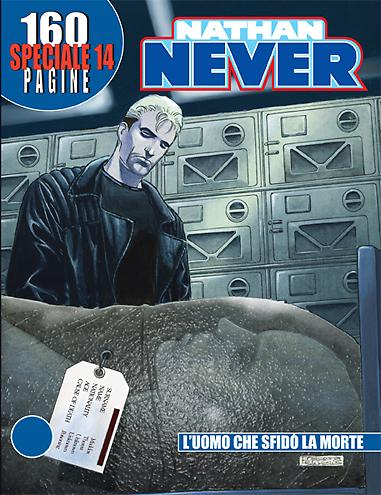 Introduction: What’s the connection between William Campbell’s experiment and the mysterious death of the cartoonist Theresa Maddox?

A well-known comics writer, Theresa Maddox, dies in baffling circumstances during festivities that have been organized to celebrate her long-lasting creative career. Nathan Never and May Frayn are placed in charge of the inquiry, which, however, doesn’t seem to be getting anywhere. Was the woman really killed? Or did she perhaps commit suicide? And what were the actual causes of death? Meanwhile, in a hidden laboratory, William Campbell, the sinister owner of a multinational that dabbles in sophisticated cutting-edge technology, is about to undergo a hair-raising experiment that could not only change his own life for ever but also change the fate of a world ravaged by war…