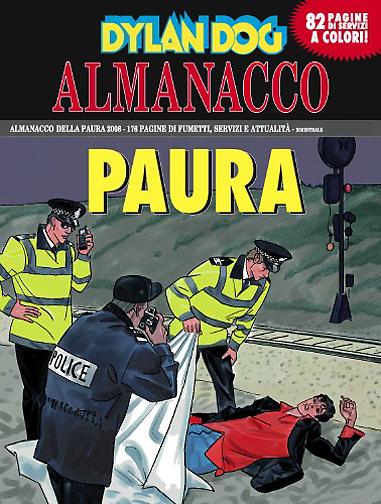 Inexplicably survived to a horrible car crash, whose final outcome she had anticipated, Johanna, a seemingly ordinary girl, finds out she has the gift to foresee other people’s death. And this not only for natural deaths, but above all for the murders and massacres perpetrated by a dangerous criminal who kills using terrible and increasingly lethal explosive devices. When Johanna asks Dylan Dog for his help, the Nightmare Investigator has no clue that very soon one of his client’s vision will be about him… This year Almanacco also features dossiers about SuperVillains (from Bluebeard to Freddy Krueger, from Fu Manchu to dr. Phibes), all the nightmares of the “Cinematic King of Horror” Dario Argento, and the thrills of the TV screen, together with the usual comprehensive roundup about horror books, movies, TV series and videogames of the year.