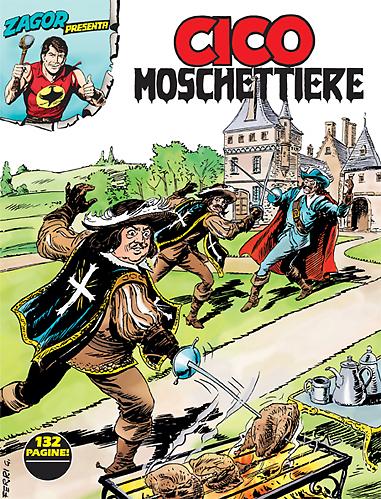 Introduction: A cloak and  spear adventure for the funniest musketeer in France!

After telling about the misfortunes that befell a cave-dwelling ancestor of his and the misadventures of a paladin and of a conquistador as well, Cico now tells the story of one of his unfortunate forebears at the French Royal Court, in the era of King Louis (the twelfth, thirteenth, fourteenth? It’s a puzzle to figure it out since, amid such a plethora of Louis, even his own subjects and the servants of the Royal House can’t quite get it clear!). Enrolled as a musketeer, Cico discovers a diabolical court intrigue, orchestrated by the perfidious Duke of Malaffaire… But before managing to avert it, Fattie will have to get up to (and put up with) a whole lot of mischief!