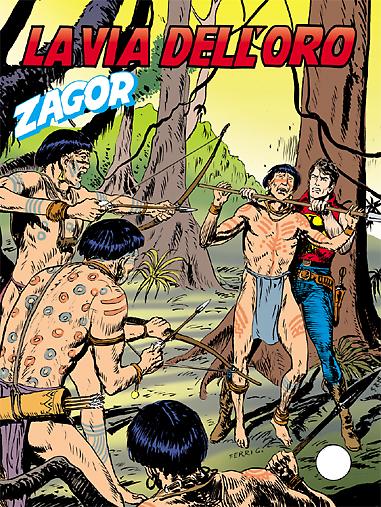 To help the fugitive slave Samuel, Zagor goes against the hired guns of the Isthmian Guard, vigilantes at the orders of the Governor, led by Ross Mc Gunn, aka “El diablo yanqui”. Having forged an alliance with the wicked Mendoza, Mc Gunn is determined to catch the Black man who escaped from his plantation. Samuel is going to a former-slaves community hidden in the jungles of Panama, whose leader is a mysterious White man called Capitan Mission. Zagor, who also has to cross the Panama isthmus, decides to go with him. The Scottish trader Cullen Scott will lead them in the maze of the forest, where the Guaymì indios are lurking. But also McGunn is very interested in Capitan Mission: the yankee villain is convinced that the Captain has found the legendary “Lima treasure”, that so many tales of the area tell about... and Samuel could bring McGunn to Mission’s secret lair!