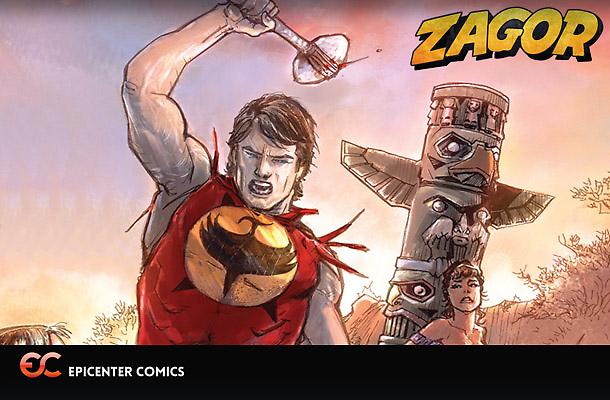 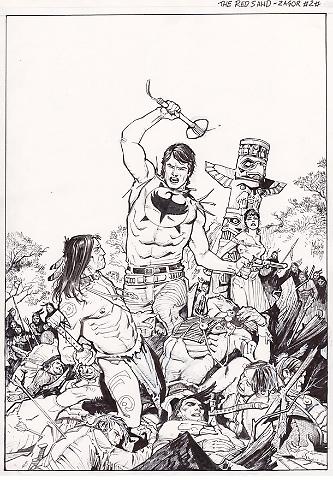 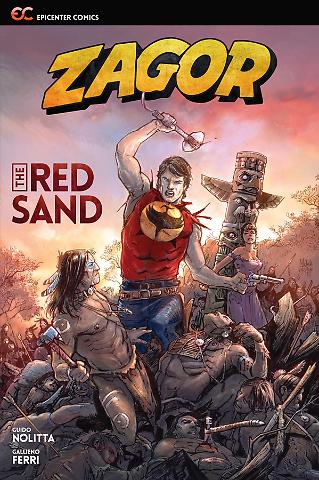 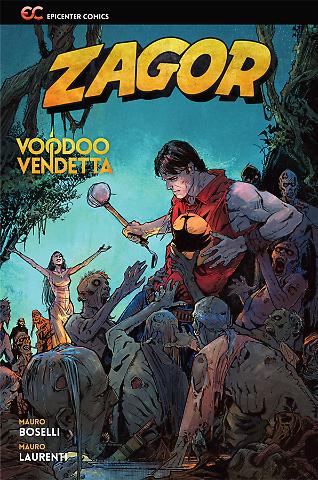 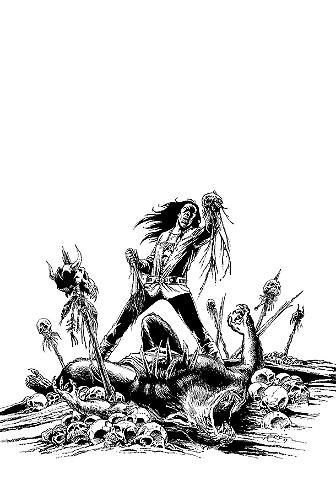 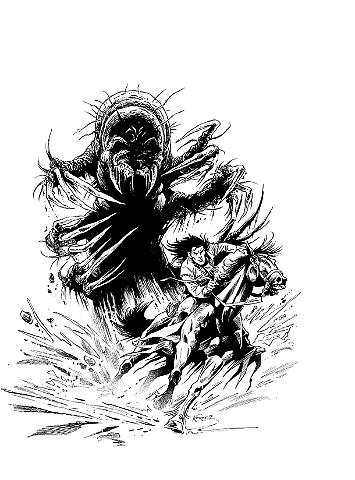 Italian comics in the USA!

We talk about Zagor, Magic Wind and other bonellian heroes with Igor Maricic, Epicenter passionate founder!

Recently, a very attractive copy of Zagor – The red sand landed on our desk: a beautiful tome, put together by Epicenter Comics to bring, once again, the Spirit with the Hatchet adventures to the american audience. We contacted the owner and founder of the publishing house, Igor Maricic, and asked him a few question about his love for the Bonelli Heroes and his personal venture into the wonderful but risky world of the comic book market.

► Epicenter comics: when and why did you decide to start this editorial enterprise?

I formed Epicenter Comics in January of 2012, but to explain it better, I need to go thirty years back in the past from that date. I’ve loved comic books most of my life. Although for more than the last twenty years I’ve lived in the USA: I was born in former Yugoslavia where I spent the formative years of my life, the years that shaped me into who I am today. When I was just six years old, my Mom bought me my first Bonelli comic at the newsstand. I still remember that day vividly! It was Tex. I was hooked, immediately! I started buying the comics every week as they were being published in two separate weekly editions. And then, just three weeks later from that Tex issue, I had a fateful “meeting”. That was the day when at the newsstand I saw the hero in red sleeveless shirt, with an eagle on the chest… It was the beginning of comic love that still burns today, maybe even brighter than when I was a kid. Of course, I’m talking about Zagor. I never dreamed I would have the honor to publish Zagor in English for the first time in history. For me it’s the second greatest honor of my life, the first one is being a father. It’s just incredible!

Right before I formed Epicenter Comics, I was going through a phase of deeper understanding of who I am, what I truly love, what means the most to me. At the same time, on the largest Croatian comics forum (stripovi.com), that I’ve been visiting daily for over a decade, there were some talks about what it would take to publish Bonelli comics in the U.S. It was an interesting discussion, at the right time. There was no turning back for me! Although I have a full time job as a scientist, I am a father, a husband and I serve in church, my passion for comics was and is too strong to be denied. It has taken a lot of sacrifice on my part to be able to juggle publishing with all the other responsibilities, but somehow I’m managing it.

► Which was, then, and which is your “mission” now?

To answer this question, I will copy here my mission statement from Epicenter Comics’ website:

“I strongly believe that arts have the power to shape and impact the way we perceive the world. It is our duty and privilege as publishers, writers, artists, printers, distributors, retailers, no matter what our life calling may be, to have a positive impact on the world, to be a small wheel turning in the right direction.

When (I was) forming Epicenter Comics the idea was to have a publishing company that would not only release unique and high quality graphic novels or comic books, but a company that would also find and nurture great talent. I promise to bring you works that will entertain you, amaze you, sometimes disturb you, but certainly make you feel and make you think, long after you've closed the book cover. “

► If I’m remembering correctly, your first publication was the English version of Magico Vento: why did you choose to debut on the American market specifically with the series by Gianfranco Manfredi? Which were, in your opinion, its strengths and why did you think it would appeal to the American readers?

As you can tell from my previous answer, I’m driven by my heart first and then by my mind. I take the big decisions with my heart and then fine tune things with my mind.

I chose to start with Magic Wind first because I really love the series, I believe in its quality, and I thought it had more chance to succeed than Zagor or Ken Parker in the US.

Zagor is my favorite Bonelli series and in my opinion Ken Parker is quality-wise the best Bonelli series. Magic Wind is my second favorite Bonelli hero and I think, quality-wise, it’s right after Ken Parker. Manfredi’s writing is just so consistent from book to book, pretty amazing, and the artwork… wow! I mean, one quick look at the names of the artists that were working on the series is enough: Pasquale Frisenda, Ivo Milazzo, José Ortiz, Goran Parlov…

If I were approaching publishing purely from a rational point of view, without a doubt I would have started first with Dylan Dog, a character which I believe has the most chance to be successful in the USA.

► How did the American market react to your edition of “Magic Wind”?

Magic Wind was received very well by the people who read our books. The problem is that my company is new and small, and the series is still pretty unknown in the USA.

► Your next step involved Zagor: last summer you brought the first volume of the Spirit with the Hatchet into the american comic books stores. Which story did you choose and which were the reasons for your choice?

The criteria of choosing Zagor stories for publishing is that they have to be non-arguably the best Zagor comic books ever! I’m an avid Zagor fan and I know all the stories inside-out and I’m also part of the community of Zagor fans (some of which are contributing with their analysis to Epicenter Comics’ Zagor edition). I chose Terror from the Sea (Il terrore dal mare) to be our first Zagor book, because I wanted to start with a volume that would be attractive to the readers who have never read Zagor before, meaning it had to be one of the more modern Zagor stories; during the years spent on the comic forum, I’ve noticed that to the younger, newer Zagor fans this story is considered the best ever. If I were choosing purely from my point of view, and based on my favorite Zagor episodes ever, I would have started with The Red Sand or Zagor vs. Supermike. I did publish The Red Sand as the second book, and Supermike will be the fourth volume of the series, coming after another excellent Mauro Boselli’s story, the adrenaline packed Voodoo Vendetta, which will be out this August!

► "Terror from the Sea”, as you stated, is a modern Zagor tale, dated 1997, written by Mauro Boselli and masterfully drawn by Stefano Andreucci, an artist with a style that could easily evoke some classic American authors. Your next proposal is “The Red Sand”, an unforgettable and beloved story by Nolitta & Ferri, the fathers of Zagor, which was first published in 1975: how did the american readers react to this different kind adventure, with a slower pace and the peculiar Ferri drawing style?

Interestingly enough, the response that I’ve got for The Red Sand from the new American readers has been very positive, some even prefer it over Terror from the Sea! I mean, there is a reason why the best Nolitta/Ferri stories are classics, they have a certain timeless quality to them.

► Tell us about your next projects involving our publications: will you go on with Magic Wind and Zagor only or are you going to publish more “Bonellian” stuff?

This summer I will be publishing two new Bonelli projects in English. The first is Dylan Dog: Mater Morbi, by Recchioni & Carnevale and The Z Factor from Le Storie series, by Gualdoni & Bianchini. Once again, two excellent comics with amazing artwork, which I believe may appeal to American audience, at least I hope so!

In the near future I hope to publish more Zagor, Magic Wind and Dylan Dog books and hopefully some other Bonelli heroes. At home I have hundreds and hundreds of Bonelli books in Croatian and Serbian and I still order them and have them shipped to me regularly.

► What are your favorite aspects of publishing comic books?

One of the most satisfying parts of publishing, for me, is coming up with the vision for the particular edition and then choosing the cover artist, as well as being the person who introduces those artists’ works to the american public for the first time. I’ve been blessed to work with some great artists. On Magic Wind covers I had an opportunity to collaborate with the legendary artist from Serbia, Bane Kerac (who is currently part of the Zagor staff) and the great Pasquale Frisenda. On Zagor, I’ve been able to work with the fantastic Michele Rubini, whose modern and dynamic vision of Zagor I’ve paired with a young modern artist from Serbia, Well-Bee, whose colors complement Rubini’s drawing very well. Recently, I’ve also collaborated with Marco Bianchini on our upcoming edition of The Z Factor.