We had a chat with Gianfranco Manfredi about his new creature—a new, adventurous Bonellian hero that will debut at your newsstands on October 4! 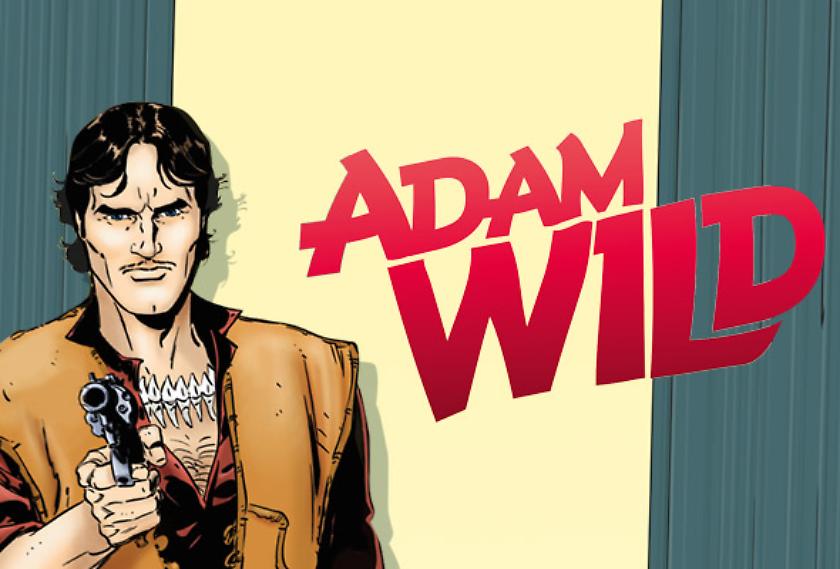 Fans of Adventure with a capital "A", comics’ lovers in general, and especially you who enjoy the stories created by Gianfranco Manfredi’s fantasy and storytelling talent, save the date for next October 4!

It will be the opening day of a new series by the author of “Magico Vento”’s long saga, as well as of the miniseries “Volto Nascosto” and its sequel, “Shanghai Devil”.

The new series is “Adam Wild”, from the name of its hero, a character with solid roots in pure Adventure; a hero we tried to get to know a little bit better, in an interview with Manfredi himself. First read our interview, than fly to our brand new section, dedicated to the world of Adam Wild!

► We go back to Africa, after Volto Nascosto’s deserts, but in a different time and place... Please, tell us about the scenery where Adam Wild’s adventures will take place...

Adam’s stories are set in subequatorial Africa, from Kenya to South Africa, including also Congo and Nigeria. It’s the classic landscape of Black Africa. Just in the first year of adventures, we will be taken to at least five different African countries, though the main setting is Tanzania.

► Who is Adam Wild, though? What is he doing in subequatorial Africa? And how does he become involved in the fight against slavery?

Adam is an explorer who operates at a time when the geographical expeditions (like the search for the Nile’s sources) begin to be replaced by the anthropological research, aimed at studying the people. In many African countries, the British implemented the abolition of slavery and the post-Lincoln Americans followed suit; but the slave trade, managed by the Arabs, is still going on towards the Middle East, as well as – in a different shape – towards the West, where the “human zoos” are becoming more and more popular: the Westerners like to watch the exotic-looking expositions of African tribes, who are treated just like caged animals in a zoo.

Adam Wild carries on the torch of Livingstone’s anti-slavery stance (he’s Scottish just like Livingstone), but his explorations also become a slave liberation effort—therefore, he is a fighter.

► How did you choose the physical appearance of the character? Did you have a face in mind, when you began thinking of Adam in action “on stage”? Who had the responsibility of his graphical characterization?

The first thing you notice about Adam Wild is the mustache. It’s a choice that evokes a time where the cinematic adventure heroes (Douglas Fairbanks, Errol Flynn, Clark Gable) always wore mustaches. This is the model we were inspired by, not the classic explorer in pith helmet and safari jacket. These are adventure hero because they are adventurers: free men who aren’t at anybody’s orders.

Alessandro Nespolino did an outstanding job in portraying Adam and the main characters around him. We tried to have a very clear definition of the protagonists, in order to make them visually very expressive. The same attention was given to the “bad guys”, that form a gallery of strong, extreme and less-than-traditional characters. They appear alone, in pairs, in group and even in a household formed only by real lunatics!

► Is there a fixed sidekick to our hero, or some recurring adventure-mates?

Adam has a fiancée – Bantu warrior-princess Amina – and a friend-sponsor, an Italian nobleman who grew up in the Vatican, Count Narciso Molfetta – but he’s not a very sympathetic character... He’s a stuck-up aristocrat, who often unwittingly makes a fool of himself.

► Can we assume that the events you tell in Adam Wild’s stories stay inside the folds of History, or did you take some poetic licence to allow your character to move more freely?

The historical and geographical setting is very detailed. We will see crucial battles, like the Anglo-Zulu War or the Anglo-Boer War, but the series will also take many horror and fantasy “detours”. I think that the readers who followed Magico Vento already know something about my habit of straying into different genres.

► While we were leafing through AW’s pages, here at our editorial office, we noticed that the series will host a number of talented authors, many of them at their Bonellian debut. Would you like to introduce us to the artists’ staff who will bring Adam Wild’s adventures to life?

We formed a 14-strong team of artists, each of them with a very personal and original style. I had previously worked only with three of the artists: Alessandro Nespolino, Darko Perovic and Paolo Raffaelli. But they didn’t repeat themselves, obviously, and offered different and new ideas. We also changed the frame and the panels of each page much more than usual.

Everybody worked with an extraordinary intensity, since this series isn’t set every time in the same scenery; it’s more of an itinerant adventure, where we cross very different landscapes. All of our artists realized that this wasn’t the usual kind of work, and that we hadn’t many reference models.

That’s why well-known masters like Laci (Vladimir Kristic) and Pedro Mauro, as well as almost-fledgling – though already very skilled – artists like Antonio Lucchi and Stevan Subic, just to name two, had a demanding task at hand. They all worked with great care and accuracy, trying to leave their mark from the beginning. And for me, working with an array of artists with such a different palette has been a beautiful creative experience up to this day.

► What kind of visual sources did the artists use as a reference, while working on the series?

We employed a large amount of visual material coming from different sources: books about the African explorations in the 19th century, historical and modern photos and documentary films. It was a very rich iconographic catalog that everyone of our artists managed to recreate through their own visual approach. This way, we created something very different from the conventional “picture-postcard” image of Africa.

► Will the stories have a very strict continuity, or will the readers be able to follow each episode on its own?

The continuity will be rather slack.

It will be there, of course, because of the many historical and chronological references that I had to put in the right order, following a logical schedule.

But you’ll be able to read and enjoy each album in itself—the majority of the stories are self-concluded adventures, with a few double episodes scattered here and there in the series.

► Finally, who are the readers you’d like to talk to, with Adam Wild’s stories? What could be, in your opinion, the target audience for your new series?

Luckily, I have readers that follow my work since the time of Magico Vento, so I didn’t try to reach any particular target group. While the project was under way, though, I received several messages which made me realize that there is a certain anticipation among the readers “orphaned” by the end of Mister No, and among many Zagor fans.

That didn’t come as a surprise for me, since those two series are Adventure series in the “classic” sense: forests, unknown tribes, nature and dangerous situations, with a touch of irony and lightness about them.

In a nutshell, if I do have a favorite reader, it’s the true-bred Bonellian reader!