What has 2017 in store for the Spirit-with-the-Hatchet? Find out in a new, lavish installment of our preview of the Bonelli Heroes' new year. 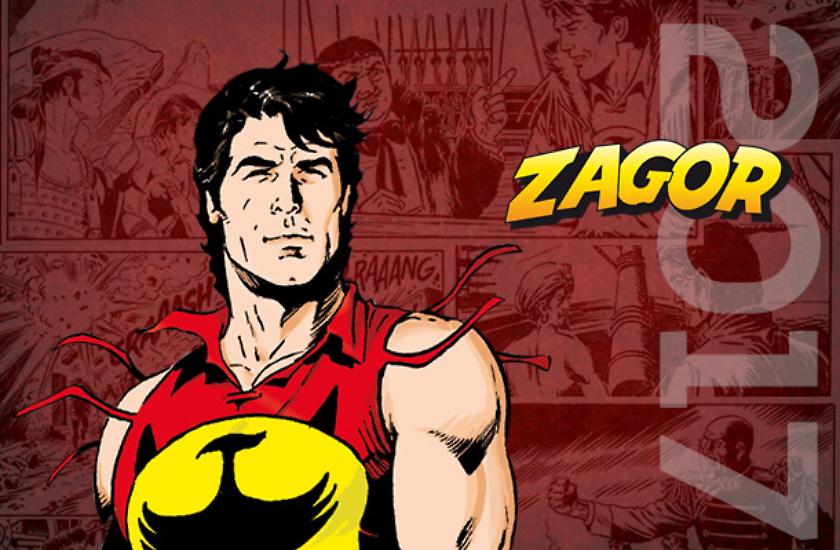 For the Spirit-with-the-Hatchet, 2017 will be chock-full of events. That's why we won't be able to list them all here, as you may expect. So, what's brewing? Some news will be presented during next months, while we will just give you a general outline of other events, leaving the surprising details to come in due time. Zagor is a lively character who does not cease to surprise — either with the variety of themes and atmospheres that his authors offer to the readers, and for the scores of exciting initiatives about him, often promoted by Zagor's fans in forums, clubs, and social network groups.

Our Publishing House has already come out of the gate running, with the first albums of an exciting year: the first proof of it is the brand-new visuals of our Maxi Zagor, with "Le strade di New York" (at your newsstands from January 20). The big city where the King of Darkwood roams will turn out to be a real "stone jungle". A long work of historical documentation helped reconstruct the scenery, but the tense adventure that takes place in the city's back alleys will be, in rhythm and emotional suspense, very similar to the stories set in the forest. We'll meet some old allies of the Spirit-with-the-Hatchet's again and get to know new friends, among whom an Italian family that will return again in the future. We'll loathe a murderers gang led by a mad and hateful boss, and watch the first baseball game in history: a new, not-to-be-missed Zagor "whale," with art by a truly inspired Marcello Mangiantini.

If you are fans of a classic style of drawing, as close as possible to Gallieno Ferri's, our next Speciale - coming up in March, and called "La nave del mistero," - will feature art by Gianni Sedioli & Marco Verni, the most faithful followers of the tradition of the Maestro. In this adventure, set in Port Whale, we'll have the return of Captain Fishleg and the "Golden Baby" crew, Ramath the Fakir included. Still talking about Ferri, next August's Zagor Color will offer you the last unpublished story by the great Ligurian artist. In May, our Magazine dell'Avventura will focus entirely on the unforgettable Gallieno, with files, essays, remembrances, interviews, photos and illustration, both published and unpublished before; and two complete stories by the late artist.

Besides this homage to the visual creator of Zagor's microcosm, on the regular series, we will see the debut of two new artists, in early 2017. But this is their debut just on the pages of the King of Darkwood since they're already well known to the Bonelli readers: the first, Roberto Piere, worked for "Zona X"; the second, Giuliano Piccininno, has a long experience in Dampyr's staff of artists. And they both have a genuine and old passion for the Spirit-with-the-Hatchet: they have been reading Zagor's adventures since when they were very young, before starting their comic-artist careers. And, as for the subject matter, their first albums will both be peculiar: Piere has worked on an expedition among the frozen lands of Baffin Island; Piccininno gave visual life to the apparitions of a disquieting witch of the Celtic tradition, the Banshee, and a knight with a flaming skull.

After these riveting episodes, you'll be presented with the return of Takeda the samurai (the ronin who had been given the task of killing Zagor with his katana, as an act of revenge for Prince Minamoto's death), with art by a better-than-ever Massimo Pesce. And the reborn Duke Smirnoff, who was the protagonist (many years ago) of an episode written by Alfredo Castelli with art by Franco Donatelli, that became an instant classic. At the end of his first appearance, the nobleman - a real villain, although in full military dress - threatened Zagor with revenge, after the Spirit had made a fool of him: and our hero promised to be there for the reckoning as well. Why has such a long time passed by without any news by Smirnoff? We'll find out about it in next fall's stories, with art by Walter Venturi.

Venturi will also be there in the early summertime, ready to introduce one of the surprise initiatives we were talking about above: a full-color miniseries, with six unpublished, self-concluded but connected episodes, featuring Cico as its main hero! We won't reveal anything else, just to leave you with the pleasure to discover it personally; suffice it to say that it will be a series of very amusing stories, in a different format from our usual, created by a surprising staff.

In September, it will be time to introduce another project that at the moment goes under the codename "I racconti di Darkwood": a series of albums in an intriguing and traditional narrative “frame” (created by Raffaele Della Monica, a surefire artist). Here, we will present five short stories (from 32 to 40 pages long) where single episodes of Zagor's life will be depicted by guest writers and artist from other Bonelli series and beyond. We'll be able, with due respect to tradition, to see different takes on the Spirit-with-the-Hatchet. For now, we'll leave it at that: you will find out who's who in due time. And the surprises are not over...